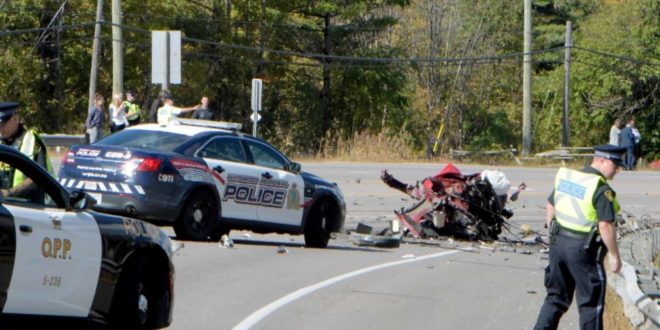 One of two people killed in a crash in Hamilton Thursday morning may have been the victim of an assault and abduction.

In a release, Waterloo Regional police said they began chasing the vehicle after following up on reports that a female was possibly being abducted and assaulted in Cambridge.

“Responding officers located the vehicle being driven by a male, accompanied by a female passenger. Police attempted to stop the vehicle and investigate the circumstances,” Waterloo police said.

“The driver of the vehicle failed to stop for the officer, and a pursuit was initiated.”

Just before 10 a.m., the vehicle crashed into the transport truck, killing both passengers of the car.

No police officers were injured.

The SIU has now invoked its mandate, and Waterloo police say they will not be making any further comments.

The SIU is an arms-length agency that investigates incidents involving police in which someone is killed, injured or accused of sexual assault.

Wreckage strewn across Hwy 6 south of 401 after double-fatal crash. WRPS was possibly in a chase. @OPP_HSD and @SIUOntario responding. pic.twitter.com/2JqzKW6DoN

Web articles – via partners/network co-ordinators. This website and its contents are the exclusive property of ANGA Media Corporation . We appreciate your feedback and respond to every request. Please fill in the form or send us email to: [email protected]
Previous: Researchers develop surgical super glue that seals cuts in seconds
Next: Pesticide traces found in 75 percent of world honey