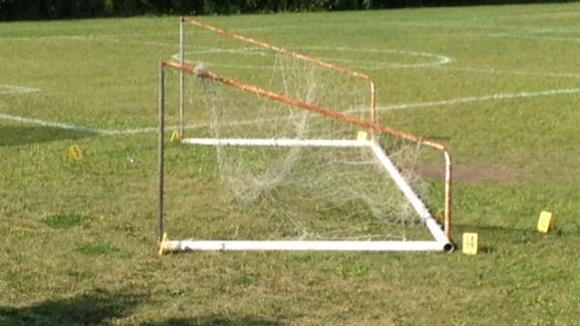 A 15-year-old girl has died after becoming trapped under the crossbar of a soccer net north of Toronto Wednesday afternoon.

South Simcoe police said the girl was seriously injured after she somehow became trapped under the crossbar of the net while playing soccer at a sports field in Bradford, northwest of Newmarket.

Investigators say the girl was playing soccer with another 15-year-old girl when one of the goal posts of the soccer net came crashing down and landed on the female victim. Police say the other girl called 911 and the injured teen was rushed to a local hospital, where she died of her injuries.

The soccer field was closed to the public as police investigated the incident.
“Police are following up on all the information (that has been collected) from the time the statement from the girl who called 911 was made,” Sgt. Sean Willan told CTV Barrie.

The girl’s name has not been released.

Web articles – via partners/network co-ordinators. This website and its contents are the exclusive property of ANGA Media Corporation . We appreciate your feedback and respond to every request. Please fill in the form or send us email to: [email protected]
Previous: TSX heads higher as US economy rebounds, Report
Next: Montreal : Lachine Hospital recalls 150 bariatric patients for HIV tests