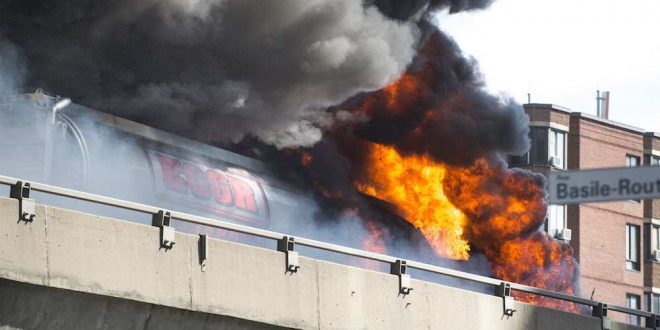 One person is dead and two people were sent to a hospital with minor injuries after a fuel tanker burst into flames on Highway 40.

Provincial police spokesman Jimmy says four vehicles — including two trucks — collided on the raised autoroute in the city’s north end at about 4 p.m.

The City of Montreal says about 100 firefighters battled the blaze and had most of it under control by 6:30 p.m.

Emergency services says six other people were injured in the crash, but the information couldn’t be confirmed by police.

Potvin says the victim was a man in his 40s.

Video taken by helicopter and broadcasted by French-language network TVA showed a man trying in vain to open the door of the tanker, apparently in an effort to rescue someone inside, before retreating from the flames.

Flames and black smoke several metres high forced the city to close a section of the elevated highway.

Mario Tremblay witnessed the devastation from the 17th floor of the building where he works, which overlooks the Métropolitaine autoroute.

Tremblay said he and his coworkers ran to the windows when they heard an explosion on the highway. They were evacuated about 30 minutes later.

“Very quickly, we saw the gas leak and then — like in a movie — we saw the fire start and right away we could see the other truck driver trying to save the driver stuck inside the truck on fire,” he said.

“We could see him panicking,”

Web articles – via partners/network co-ordinators. This website and its contents are the exclusive property of ANGA Media Corporation . We appreciate your feedback and respond to every request. Please fill in the form or send us email to: [email protected]
Previous: Concentration camp suspects identified, Report
Next: Manchester house explosion: Man dies after huge blast destroys family home