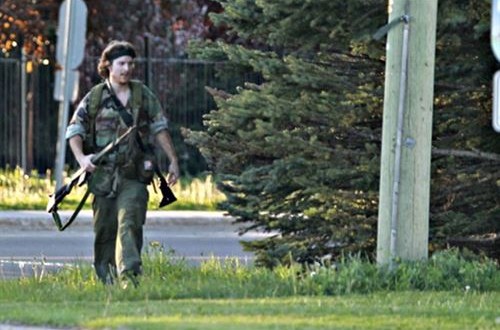 Cop killer Justin Bourque has been sentenced to life in prison with no chance of parole for 75 years.

Judge David Smith of the Court of Queen’s Bench in New Brunswick delivered his precedent-setting ruling today after a sentencing hearing earlier this week during which Bourque apologized to the families of the Mounties he shot.

Bourque’s sentence is the harshest in Canada since the last executions in 1962.

He pleaded guilty in August to three counts of first-degree murder and two counts of attempted murder.

The 24-year-old was facing a mandatory life sentence, so the only issue for Smith to decide was when he could apply for parole.

The Crown sought the maximum sentence of 75 years under a section of the Criminal Code that was amended in 2011.

The defence argued for parole eligibility to be set at 50 years.

Web articles – via partners/network co-ordinators. This website and its contents are the exclusive property of ANGA Media Corporation . We appreciate your feedback and respond to every request. Please fill in the form or send us email to: [email protected]
Previous: France holds up delivery of warships to Russia, Report
Next: How Canada faked its place in space (Photo)