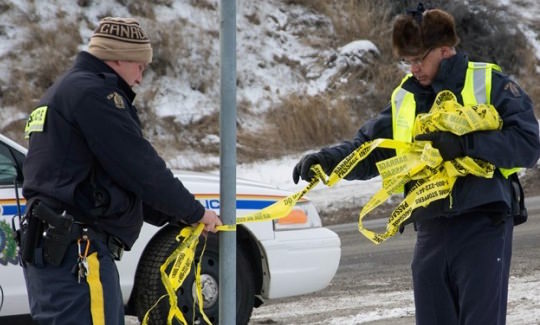 A 36-year-old convicted killer has been charged with the attempted murder of Kamloops Mountie Cpl. Jean Rene Michaud during a traffic stop Wednesday.

Charges against the 36-year-old, who is well-known to police, include attempted murder, aggravated assault of a peace officer, possession of a firearm while prohibited and discharging a firearm with intent to wound, maim, disfigure or endanger life.

The vehicle involved in the traffic stop when Cpl. Jean-Rene Michaud was shot has been seized from a home on Raven Drive that the suspect is known to be associated with. Police have been on scene since yesterday.

Cpl. Cheryl Bush said three women have also been arrested, but it is not known what charges they may face. One of the females was arrested on unrelated outstanding warrants.

Michaud was shot Wednesday at 2:45 a.m. when he pulled over a white Intrepid in a ‘routine traffic stop.’ A backup officer exchanged gunfire with the suspect, apparently striking him in the arm, before the vehicle took off. The area was under heavy police presence for much of the day as officers searched for the Knutson and the vehicle.

Michaud was rushed to hospital where he underwent ‘successful’ surgery. He remains in critical but stable condition in intensive care and will likely need further surgery.

Knutson will appear in court by video conference on December 18.

Web articles – via partners/network co-ordinators. This website and its contents are the exclusive property of ANGA Media Corporation . We appreciate your feedback and respond to every request. Please fill in the form or send us email to: [email protected]
Previous: Cat Survives Move To Hawaii In Box : Mee Moowe survives a month without food or water (Video)
Next: Researchers find cancer in man who died 4500 years ago