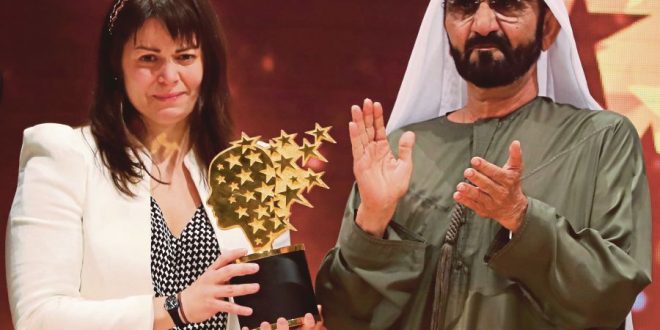 Her victory – which brings with it a prize of $1 million – was announced at the Global Education and Skills Forum in Dubai by an astronaut in the International Space Station, and Ms MacDonnell was congratulated via video message by Canadian prime minister Justin Trudeau.

Ms MacDonnell lives and works in Salluit, an Inuit community in the far north of Quebec which has experienced a number of social problems, including a high number of suicides.

She has helped support several suicidal pupils, set up a life-skills programme for girls, secured funding for hot meals in the community, established a fitness centre and even been a foster parent to some of her own pupils.

Accepting the prize, she said: “The Inuit matter, thank you for bringing global attention to them.”

The winner of the Global Teacher Prize, which is provided by the Varkey Foundation, was announced 80 miles above the Earth by Thomas Pesquet, an astronaut in the International Space Station, who sent a message thanking teachers across the world.

“None of these giant leaps would have been possible without teachers,” he said.

“I’d like to be the first person in history to thank all the world’s teachers from space.”

Mr Trudeau congratulated Ms MacDonnell via a video message in English and French.

A former French and maths teacher, he thanked her “from one teacher to another”.

“I would like to say thank you to every teacher out there,” he said.

“Teachers owe responsibilities to many people – to students, to parents, to the community, the school board.

The ceremony was shown a video of TV adventurer Bear Grylls delivering the prize by jumping out of a helicopter in a tuxedo above Dubai.

Web articles – via partners/network co-ordinators. This website and its contents are the exclusive property of ANGA Media Corporation . We appreciate your feedback and respond to every request. Please fill in the form or send us email to: [email protected]
Previous: Amazon tribe has lowest heart risk ever seen, says new research
Next: Earth’s Original Crust Found in Canadian Shield