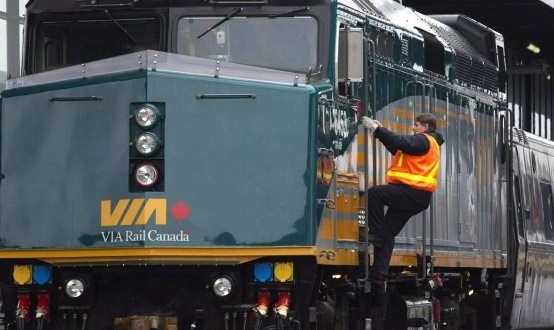 Provincial police say a man is dead after a CN freight train struck a passenger vehicle at a crossing just west of Trenton.

Firefighters at the scene had to extricate at least one victim from inside the vehicle, which was crushed into the front of the train’s lead locomotive in the crash at about 10 a.m. Wednesday morning.

All train service between Toronto and Montreal and Toronto and Ottawa, including Via Rail, CN and CP, was halted until further notice, and Tate Road was expected to remain closed to vehicular traffic in both directions for the majority of the day.

The same routes were out of service last Friday after a CN freight train derailed and one of its cars hit a Via Rail passenger train carrying more than 300 people. Train 47 was en route from Ottawa to Toronto when the accident happened near Gananoque, just east of Kingston, around 3 p.m. Passenger service did not resume until Saturday morning.

One passenger sustained minor injuries in that crash.

Web articles – via partners/network co-ordinators. This website and its contents are the exclusive property of ANGA Media Corporation . We appreciate your feedback and respond to every request. Please fill in the form or send us email to: [email protected]
Previous: Road closed after chemical spill, Police
Next: Poor diabetics more likely to lose a limb, Study