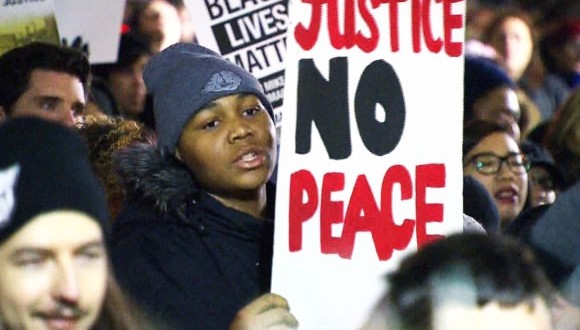 Thousands braved freezing temperatures in Toronto on Tuesday night to hold a vigil for Michael Brown, an unarmed black teenager slain by a white police officer in Ferguson, Mo., in August.

“No justice, no peace, no racist police,” the protesters, who were dressed in black and wedged between the Superior Court and the consulate, yelled into the night air.

Emilie Ruel, 7, was standing at the front of the crowd wearing panda-bear mittens while holding a blood-spattered sign that read “Black Lives Matter.” Her mother, Akio Maroon, one of the event organizers, rallied the crowd by calling for a “complete and utter elimination of police violence.”

“We need to stand up and say enough is enough. Toronto Police Service, I am telling you, every single officer here, you are on notice,” Maroon shouted.

The protest, arranged on Facebook, generated some backlash online when organizers suggested all white or non-black people stand at the back, don’t speak to media and “refrain from taking up space in all ways possible.”

“Remember that you are there in support of black folks, so should never be at the centre of anything,” their post stated. Over 100 people commented on the post, with some asking if the protest was “an anti-racist rally or a pro-segregation one.”

Bilan Arte, one of the organizers, wrote on her own Facebook page Tuesday that she had received more than 50 messages from offended “righteous upset white people.”

During the protest, organizers called for white people to move to the back of the crowd; they did.

La Tanya Grant, the cousin of Jermaine Carby, 33, who was shot dead by a Peel Regional Police Officer in September, told the Toronto crowd that her family was still waiting for answers about what happened the night Carby died.

“Police can no longer just shoot people in the streets and just because they have a badge be justified by it,” she said.

Protest organizer Sandy Hudson said she hoped it would educate people about racial profiling and police brutality in Toronto, “not just in Ferguson, because it’s also happening here,” she told Torstar News Service.

Web articles – via partners/network co-ordinators. This website and its contents are the exclusive property of ANGA Media Corporation . We appreciate your feedback and respond to every request. Please fill in the form or send us email to: [email protected]
Previous: Christa Engles shot by toddler : Mother shot dead by her toddler son as she changes her one-year-old daughter’s nappy
Next: Semi Jump Record – Video: Big rig jumps F1 car, sets record