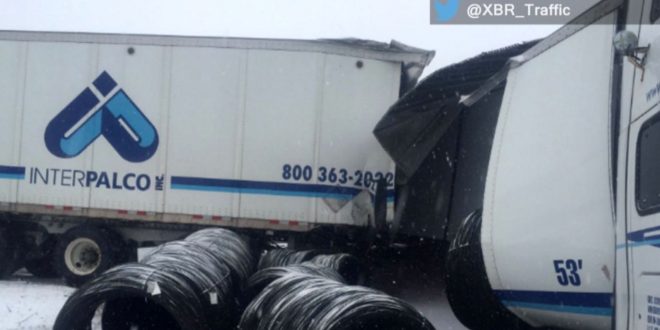 Police: Highway 401 closed in both directions after chemical spill

Police: Highway 401 closed in both directions after chemical spill

One person has died and 28 others are being treated in hospital following a massive pileup that involved a hazardous chemical spill on Highway 401 in eastern Ontario.

It happened at about 2:00 p.m. on Highway 401 westbound, in Leeds and the Thousands Township.

Police say there were two separate collisions, the first one occurred just east of Highway 137 and involved five tractor trailers and one car.

The driver of one of the tractor trailers has since succumbed to his injuries.

The second collision was also westbound, about one kilometer west of the first, and involved seven tractor trailers and three vehicles.

There were multiple chain reaction crashes after the fact behind those two collisions.

A Code Orange was declared at Kingston General Hospital where 29 patients were taken from the collision scenes. KGH opened a decontamination bay for all those who were exposed to the chemical, fluorosilicic acid, that spilled from a transport at the scene.

13 of the patients were first responders who underwent decontamination and were held for observation as a precaution.

Exposure to the chemical could cause irritation to the nose, throat, respiratory system, irritation, redness or swelling of the skin and severe eye irritation.

The Code Orange was over as of 8:00 p.m. as the influx of patients has slowed down and the emergency department resumed normal operations.

Some patients have begun to be discharged from the hospital

Highway 401 from Mallorytown Road to Reynolds Road at Landsdowne remains closed and it’s unclear when it will reopen.

Web articles – via partners/network co-ordinators. This website and its contents are the exclusive property of ANGA Media Corporation . We appreciate your feedback and respond to every request. Please fill in the form or send us email to: [email protected]
Previous: UK cruise ship crashes into coral reefs in Indonesia
Next: Spiders eat 400-800 million tons of prey every year, says new research