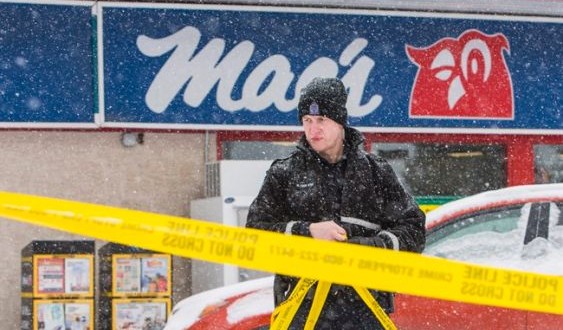 Charges are pending against two men and a 13-year-old boy accused of gunning down two Mac’s convenience store employees in Edmonton during early morning robberies the police chief called “gratuitous” and “evil.”

The suspects were arrested after officers spotted them in a stolen vehicle outside a third Mac’s store and gave chase.

Police Chief Rod Knecht says the killings were “barbaric and gratuitous” and the community should be outraged.

Officers found the first victim after an emergency alarm was sounded, and he was rushed to hospital, but died of his injuries.

The second employee was found dead in the back room of the store by a delivery man.

Knecht says neither victim offered any resistance during the robberies.

Web articles – via partners/network co-ordinators. This website and its contents are the exclusive property of ANGA Media Corporation . We appreciate your feedback and respond to every request. Please fill in the form or send us email to: [email protected]
Previous: Police arrest anti-capitalist protesters downtown (Video)
Next: Rebecca Dunbar gets backlash for breastfeeding baby on Santa’s lap