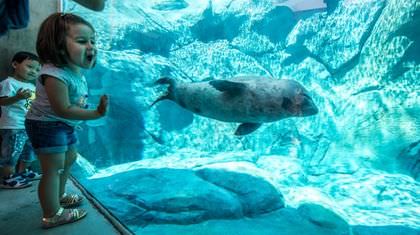 Vancouver Aquarium harbour seal dies after getting caught in drain

Vancouver Aquarium harbour seal dies after getting caught in drain

The Assiniboine Park Zoo says one of its harbour seals has died after getting stuck in an underwater drain.

“The death of an animal is always hard and this is no exception,” said Dr. Brian Joseph, Director of Zoological Operations for the Assiniboine Park Zoo in a press release.

“We don’t know exactly what happened. We do know that seals are very investigative. They’re always poking around and we suspect he poked around and got stuck,” Joseph said Tuesday.

“We’re very saddened by his death. We try to keep our animals safe in every way we can but sometimes we’re unable to protect them from things that they do.”

The male harbour seal, named Caelum, was stranded as a pup on Vancouver Island almost two years ago. Officials with the Vancouver Aquarium determined he was almost completely blind and could not be released.

He was transferred to the Winnipeg zoo in July.

Joseph said the drain had never caused a problem with a seal before and the death came as a shock.

The valve to the drain, the only one like it in the pool, has been permanently shut off, he said, and the zoo’s remaining male harbour seal is safe.

Joseph said staff members are saddened by the death of the animal.

“Every loss of every animal we take very personally because we truly do our best to keep them safe.”

A Siberian tiger was killed by another tiger at the zoo in September after an employee mistakenly left a gate unlocked between their two enclosures. A group of high school students on a class field trip witnessed part of the attack.

Web articles – via partners/network co-ordinators. This website and its contents are the exclusive property of ANGA Media Corporation . We appreciate your feedback and respond to every request. Please fill in the form or send us email to: [email protected]
Previous: Stable fire kills more than 30 horses in Chicago suburbs
Next: Lakes in Ontario covered by jello scum thanks to industrial pollution, new study shows