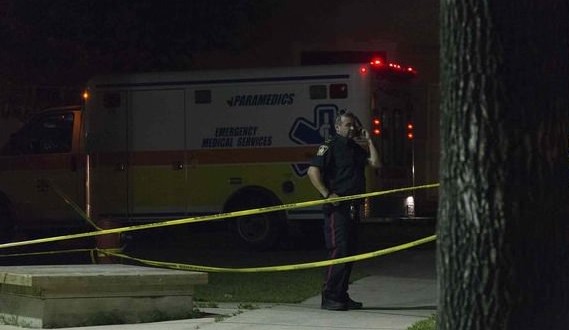 An armed standoff in Winnipeg that lasted nearly 17 hours has ended, after a man fired gunshots at officers while barricading himself inside a house, police say.

The Winnipeg Police said they received a call at 10:45 a.m. about a man uttering threats to police. They said the man could be harmful to himself and others.

Police said they arrived on the scene at 11:00 a.m. and tried to engage the man, who refused to leave the house.

They said at 8:20 p.m. the man fired shots at the police, who then returned fire. Nearby neighbours heard the shots.

“Four shots went off inside the house and that’s when things began [to get] a little bit crazy,” said resident Renae Houle, “We all had to duck, you know, because it got escalated, it was pretty scary.”

Houle said she saw SWAT teams in the area, and other Winnipeg police officers crouched with their weapons drawn.

Police said residents in the area were evacuated and taken to buses on nearby Powers Street. Houle also said the power was cut off.

Web articles – via partners/network co-ordinators. This website and its contents are the exclusive property of ANGA Media Corporation . We appreciate your feedback and respond to every request. Please fill in the form or send us email to: [email protected]
Previous: Sabina Altynbekova Shunned For Being ‘Too Pretty’ (Video)
Next: TSX heads higher as US economy rebounds, Report