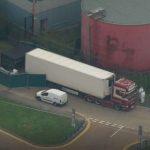 A murder investigation has been launched by Essex Police after 39 bodies were found in a lorry. The ambulance service was called to Waterglade Industrial Park in Grays shortly before 1.40am this morning. Emergency services arrived and 39 people were pronounced dead at the scene. Early indications suggest 38 of the bodies belong to adults and one is believed to ... END_OF_DOCUMENT_TOKEN_TO_BE_REPLACED