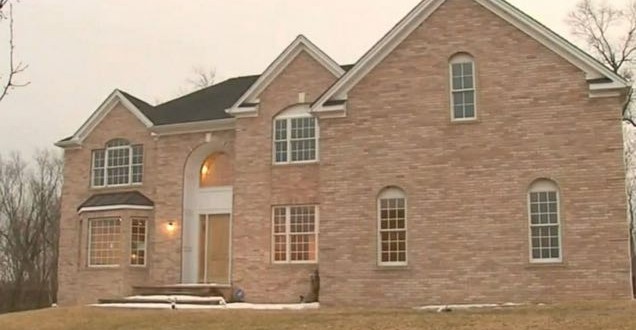 A $1.6M Home is Uninhabitable? Nine years after a Florham Park man bought his dream home, he has still not been able to move in.

Humayun Akhtar bought the home in 2006 for $1.6 million in part of a new Florham Park development. Soon after, a plumber noticed cracks in the foundation. Engineering experts told Akhtar the house is literally sliding down the hill it was built on.

Now Akhtar is in a protracted court battle with builder JDN Properties, who he says have left him financially ruined and emotionally broken.

‘I used to be a singing, laughing person,’ Akhtar told WABC. ‘I don’t listen to music anymore. I haven’t seen a movie in ten years, I can’t relax anymore.’

Akhtar and his family have not spent a single night in the home, which has buckled so severely that a marble placed on the floor will roll freely without the slightest push.

‘I spent all the money I had and I was cleaned out. I have nothing now,’ he said.

Akhtar successfully won a settlement against JDN Properties in 2011 for $7.4 million on claims the company defrauded him by cutting corners on soil beneath the foundation that wasn’t strong enough to bear the house.

However, the company recently won an appeal of that decision.

JDN Properties argues they tried to get Akhtar to let them repair the home before the damages worsened.

Akhtar maintains he was too afraid the company would do a quick fix on the foundation.

Now the case will be seen before a New Jersey jury, which will decide if JDN Properties knowingly defrauded Akhtar.

Web articles – via partners/network co-ordinators. This website and its contents are the exclusive property of ANGA Media Corporation . We appreciate your feedback and respond to every request. Please fill in the form or send us email to: [email protected]
Previous: Two Surrey men shot in targeted attack
Next: Kelly Rowland Reveals How She Dropped 70 Pounds, Just four Months After Baby