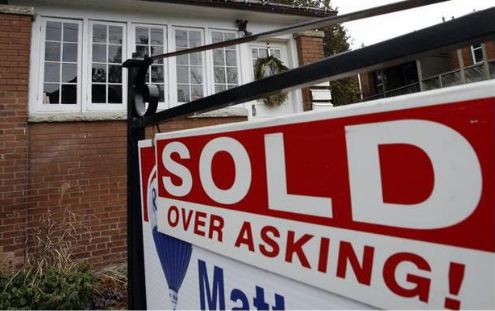 For the first time in Toronto, the average price of a detached home has reached an average of more than $1 million.

“Even with the record low temperatures last month, we still saw an increase in the number of people purchasing homes in the GTA,” TREB president Paul Etherington said in a release.

“This speaks to the importance households place on home ownership and the fact that buyers continue to view ownership housing as a quality long-term investment in which they can live.”

It’s likely not a coincidence that after a drop in mortgage rates in February, following the Bank of Canada’s surprise 0.75 per cent interest rate reduction, that the real estate market had a busy February.

The Toronto Real Estate Board’s monthly update shows 6,338 sales in the GTA, which is up by a substantial 11.3 per cent compared to a year ago.

Buyers found fewer ‘for sale’ signs on front lawns, and the supply of homes available was down by 8.7 per cent by the end of February, leading to more buyer competition.

The entire GTA was strong, with the average home price selling for $596,163 — up 7.8 per cent compared to February of 2014, driven by the detached home market.

“The strong year-over-year price growth we experienced in February points to the robust demand for ownership housing in the GTA,” Jason Mercer, a director at TREB, said.

Web articles – via partners/network co-ordinators. This website and its contents are the exclusive property of ANGA Media Corporation . We appreciate your feedback and respond to every request. Please fill in the form or send us email to: [email protected]
Previous: Misao Okawa : World’s oldest person turns 117
Next: Chris Hemsworth Fail at ‘Dirty Dancing’ Lift in ‘SNL’ Promo (Video)