Home » Money » The Best Companies to Work for in 2014 : It’s not Apple, Google or Facebook 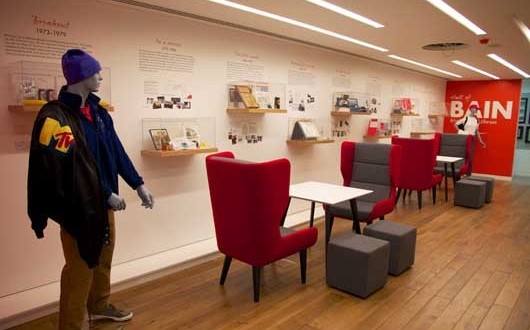 The Best Companies to Work for in 2014

The Best Companies to Work for in 2014 : It’s not Apple, Google or Facebook

Whether it’s the management, sweet perks, or endless opportunities, some companies just know how to make their employees happy.

Job community site Glassdoor released its annual Employees’ Choice Award, which measures employee satisfaction on a scale of one to five, as well as their overall experience at the companies.

This year’s top 5 are Bain & Co., Twitter , LinkedIn , Eastman Chemical , and Facebook . Global consulting firm Bain, which also ranked first in 2012, has reclaimed the top spot from Facebook, which dropped out of the top three for the first time in four years. (Bain, based in Boston, collects workplace awards at an impressive rate, not only from Glassdoor but also from Working Mother and Consulting magazines and the Human Rights Campaign).

Second-ranked Twitter is brand-new to the Top 50, as are Disney and Chick-Fil-A. Costco Wholesale , which has a long-standing reputation for employee satisfaction, jumped from #46 on last year’s list to #16 this year, the biggest climb of any company on this list.

Several grocery companies rang up high scores, including Costco, which rates high across the board on pay, benefits, and room for advancement; and regional chains HEB, Publix, and Wegman’s.

Consumer products that earned employee loyalty are Procter & Gamble, Nike, and Nestle’s Purina, where dogs are welcome at the company’s corporate offices and there’s an on-site dog park.

Old and new energy companies have workers fired up. On the list are Chevron, oil and gas equipment provider Cameron International, and SolarCity, which installs photovoltaic systems for homeowners and businesses. SolarCity’s enterprise clients include Wal-Mart, the U.S. military, and cities and schools around the country.

Chain restaurants that serve up worker satisfaction are Starbucks, Chick-Fil-A, and Texas Roadhouse. At a time when fast-food workers around the country are starting to organize strikes, Chick-Fil-A gets high marks for flexible hours and Sundays off. Starbucks’ policy of granting benefits to both full and part-timers gets warm reviews from its baristas.

Web articles – via partners/network co-ordinators. This website and its contents are the exclusive property of ANGA Media Corporation . We appreciate your feedback and respond to every request. Please fill in the form or send us email to: [email protected]
Previous: The Hobbit : The Desolation of Smaug (2013 – Trailer)
Next: Hottest Tech Gifts of 2013 for the Holidays