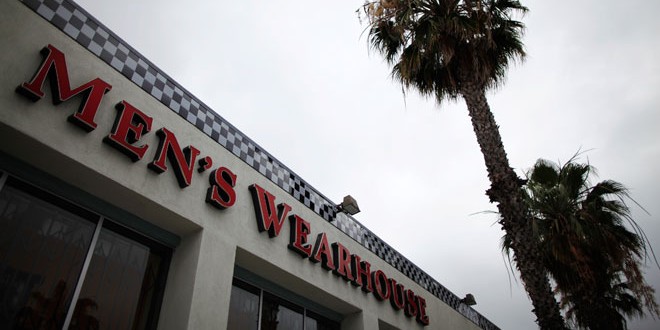 Men's Wearhouse Gets Hostile With Jos. A. Bank

Business digest : Men’s Wearhouse Gets Hostile With Jos. A. Bank

Men’s Wearhouse (MW) got tougher in its pursuit of Jos. A. Bank Clothiers (JOSB), and the prospect of a hostile merger drove up shares of both companies Monday.

Men’s Wearhouse raised its bid to $57.50 a share from $55 and said it would push to place two directors on Jos. A. Bank’s board.

On Dec. 23, Jos. A Bank’s board unanimously rejected an earlier offer, which came as a counterbid to an offer it made for larger rival Men’s Wearhouse.

In a statement Monday, Men’s Wearhouse said it was taking the gloves off.

“While it is our strong preference to work collaboratively with Jos. A. Bank to realize the benefits of this transaction, we are continuing to carefully consider all of our options to make this combination a reality,” the chain said.

For its part Men’s Wearhouse is appealing directly to Jos. A. Bank shareholders to approve the deal and has nominated two new directors, former Miller Brewing Co. CEO John Bowlin and Macy’s East CEO Arthur Reiner, to run independently for seats on the Jos. A. Bank board of directors. “Our $57.50 per share proposal to acquire Jos. A. Bank is compelling and provides substantial value and immediate liquidity to Jos. A. Bank shareholders,” says Men’s Wearhouse CEO Doug Ewert. “Although we have made clear our strong preference to work collaboratively with Jos. A. Bank to realize the benefits of this transaction, we are committed to this combination and, accordingly, we are taking our offer directly to shareholders.”

Men’s Wearhouse says its current offer is good until March 28. Jos. A. Bank says it will make another recommendation to shareholders by Jan. 17.

If the two retail chains ultimately merge, the result would be been a combined e-commerce operation with annual web sales of about $160 million, according to the Internet Retailer Top 500, CORRECT? and combined monthly visits of 3.6 million and monthly unique visitors of 1.4 million, according to web site measurement firm Compete Inc.

Web articles – via partners/network co-ordinators. This website and its contents are the exclusive property of ANGA Media Corporation . We appreciate your feedback and respond to every request. Please fill in the form or send us email to: [email protected]
Previous: Ludacris buys house in Hollywood Hills
Next: Salma Hayek & Valentina: Charity Chic (PHOTO)