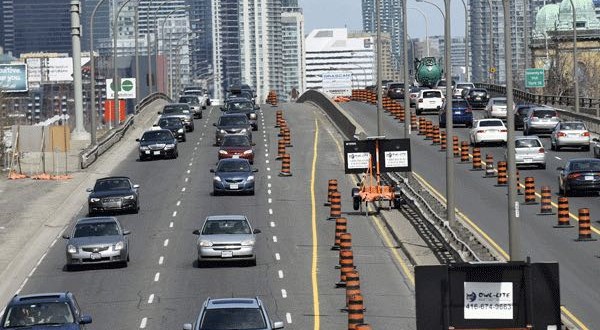 Good news for drivers who use the Gardiner Expressway.

Mayor John Tory says the stretch between Exhibition Place and Grand Magazine Street has been reopened 2 months ahead of schedule.

The third eastbound lane of the roadway will be reopened within the next week, states the City of Toronto in a release.

Because this work has come to an end, the city has reinstituted the weekday closure of the ramp from the westbound Lake Shore Boulevard to the Gardiner Expressway at Jameson Avenue. The ramp closure will be limited to 2 to 7 p.m. on weekdays (Monday to Friday).

“The Jameson ramp is closed during the afternoon weekday rush hour to improve safety and alleviate traffic congestion on the Gardiner Expressway,” reads a release. “The physical characteristics of this ramp, which include a short merge distance and bridge abutment at the end of the ramp, can lead to unsafe conditions and can result in significant traffic congestion.”

Web articles – via partners/network co-ordinators. This website and its contents are the exclusive property of ANGA Media Corporation . We appreciate your feedback and respond to every request. Please fill in the form or send us email to: [email protected]
Previous: Johnny Depp, Amber Heard pictured holding hands in Brisbane (Video)
Next: Canadians lead the world in using the smiling poop emoji, report says