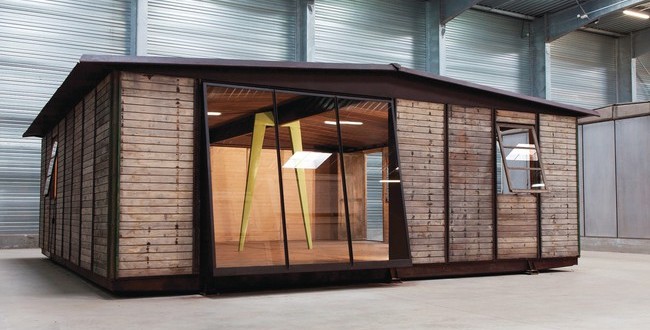 A full-scale construction of one of Jean Prouvé’s demountable houses. Designed in 1945, the 8×8-meter house has been assembled with parts from the Prouvé factory by Galerie Patrick Seguin.
As the design world converges on Miami this week for Design Miami’s ninth annual congregation of curators, collectors, critics, and celebrities, design icons from the past are taking center stage. “We have consistently expanded our program over recent years,” says Marianne Goebl, director of Design Miami. “This December, visitors to the fair will discover the widest range of historic positions to date.”

Pioneering Modernist Charlotte Perriand is the focus of not one but four exhibitions on view at Design Miami’s main venue, The Raleigh Hotel, the Louis Vuitton boutique, and the Cassina showroom. Her countryman and one time collaborator Jean Prouvé has an equally commanding presence with a full-scale construction of one of his demountable houses.

“It’s no coincidence that these exhibits are happening simultaneously,” says François Laffanour, owner of Paris’s Galerie Downtown, which is hosting Charlotte Perriand – A House in Montmartre. “The post-war work of these designers represents a way of living, not just decoration. It is smart but simple, with a human quality that is very attractive to us today.” Laffanour has dedicated over 30 years to creating the market for original works of Perriand. His Miami show features Japanese-inspired pieces that Perriand designed in the 1950s for a house for industrialist Jean Borot. According to Laffanour, who purchased the house two years ago, “Each piece is unique and designed specifically to fit in this house, so some of the dimensions are unusual. For example, the console is very long.”

Prices for these one-of-a-kind designs range from $40,000 for the smaller pieces to $600,000 for a multi-paneled table. Coming in with an even heftier, but undisclosed price tag is the Prouvé house. Designed in 1945, the 8×8-meter house has been assembled with parts from the Prouvé factory by Galerie Patrick Seguin, who mounted similar exhibits of earlier Prouvé houses at art fairs in Basel and Paris, but never before in the United States. “The size of the house was based on the capacity of the four-meter-long press in Prouvé’s workshop,” says Seguin. “He wanted to show that building a house is no different from building furniture.”

Web articles – via partners/network co-ordinators. This website and its contents are the exclusive property of ANGA Media Corporation . We appreciate your feedback and respond to every request. Please fill in the form or send us email to: [email protected]
Previous: San Marino, Calif : The Holiday home sold for $3,250,000 in 1998
Next: X-men : Actor shawn ashmore buys house, City Bachelor Pad