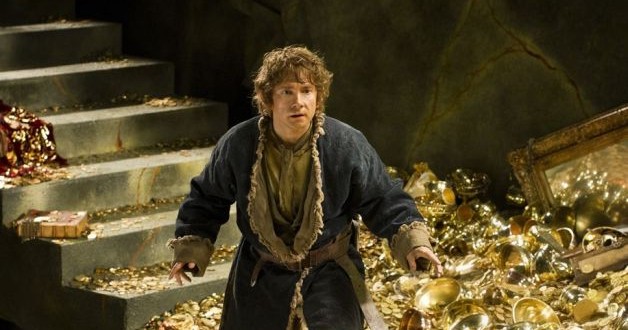 Box office Film Winner : ‘The Hobbit, The Desolation of Smaug’

The Christmas box office race: winner was “The Hobbit: Desolation of Smaug,” which has a tidy $190 million in the bank domestically. It’s nothing to sneeze at. But “Smaug” is running around $30 mil behind the first Hobbit movie, “An Unexpected Journey.” The Smaug may be too thick, or there are just a lot choices out there.

Meantime, “American Hustle” beat “The Wolf of Wall Street”– narrowly, yes. And “Wolf” is limited in its earning power by its length. There are fewer showtimes during the course of a day. Both movies are headed to the Oscars.

Ben Stiller’s The Secret Life of Walter Mitty failed to catch fire and still has some work to do to make up that $90 million budget. The film managed $13 million this weekend and has made $25 million since its Christmas opening.

Moving to ninth we find our next new Christmas release in 47 Ronin, a film with a budget ranging from $175-250 million depending on what you believe. The film opened with $7 million on Christmas Day, but only managed $9.8 million over the three-day.

Then there’s the matter of Grudge Match, which couldn’t even crack the top ten, coming in 11th with $7.3 million, though I guess it could eek out a victory over Tyler Perry’s A Madea Christmas once actuals arrive.

Next weekend kicks off 2014 with Paranormal Activity: The Marked Ones and for those of you competing in the RopeofSilicon Box Office Challenge, we’re still waiting for Paramount actuals from last weekend, which means we not only have this weekend’s actuals to wait on, but last as well. Word is those numbers may not arrive until January 3, so we may be waiting a little while before crowning a 2013 winner.

Web articles – via partners/network co-ordinators. This website and its contents are the exclusive property of ANGA Media Corporation . We appreciate your feedback and respond to every request. Please fill in the form or send us email to: [email protected]
Previous: Ford to unveil aluminum truck in Detroit
Next: After Taylor Swift Grants Wish, Laney Brown Fan Dies of Leukemia