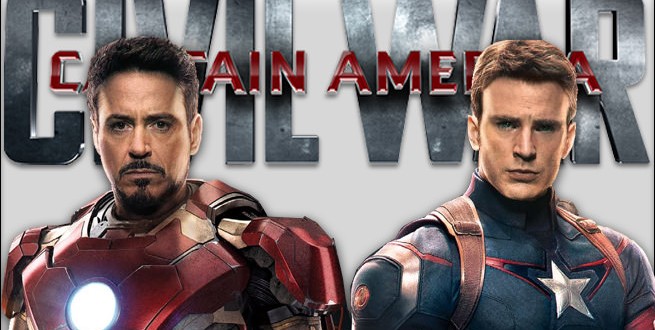 The first trailer for Captain America 3: Civil War has FINALLY been unveiled and it’s given us more than a few clues as to what to expect from the third instalment of Cap’s Marvel film franchise.

The first trailer for Civil War debuted during the Jimmy Kimmel Live show on Tuesday night, with Chris Evans and Robert Downey Jr. making an appearance to discuss the film. The two Avengers then showed the first promotional poster for the film and the first official trailer for the movie, a trailer that fans have been anxiously waiting for.

One of the highlights of the trailer is the fighting between Captain America and Iron Man, and we can’t wait to see will happen next with the Avengers crew, especially considering that many of them will also star in the movie set to premiere next May. “Divided we fall,” reads on the official poster that shows the two superheroes facing each other, and the message couldn’t be clearer.

Check out the full Captain America: Civil War trailer and official poster below.

Web articles – via partners/network co-ordinators. This website and its contents are the exclusive property of ANGA Media Corporation . We appreciate your feedback and respond to every request. Please fill in the form or send us email to: [email protected]
Previous: Simply Eating Walnuts May Improve Your Diet Overall, Study Says
Next: Li-Fi: This technology could be 100 times faster than WiFi