Home » Movies - Series » “Doctor Who” lands with a splash 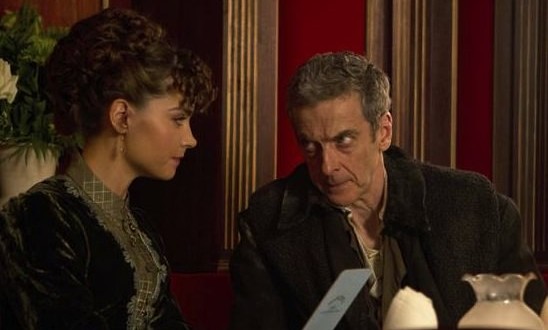 "Doctor Who" lands with a splash

“Doctor Who” lands with a splash

Last night was a big one for all the Whovians around the world as Peter Capaldi’s 12th Doctor was finally unleashed completely in his first full Doctor Who episode.

Capaldi was an avid viewer and says the first four Doctors – William Hartnell, Patrick Troughton, John Pertwee and Tom Baker – influenced everything he has done in his career.

Speaking at a special screening and Q&A at Odeon Leicester Square cinema in London, he said: ”They are moments where we consciously touch upon previous Doctors and I introduce some of the little traits that are from them.

”To be honest because I was such a big fan of the show when I was growing up. I think specifically the first four Doctors found there way into my DNA.

”I think even if I hadn’t won the part if Doctor Who there still would be a little bit of them in the kind of actor that I am. Instead of going to RADA and bring taught how to act properly I was taught at the school of ‘Doctor Who.’ ”

Peter also revealed he turned to the two previous Doctors – Matt Smith and David Tennant – to get their perspective on taking on the iconic role.

He added: ”I spoke to David and Matt quite a lot about the role. The fantastic thing is they’ve both been at the heart of this huge show.
”The series can be quite tough to make, it’s a fabulous job, but you are confronted by a host of new things. We went to the read through and there was something like 250 people there and I’m trying to figure out who they all were and what they all did.

”So making your way through this maze can be quite difficult. Jenna has been really helpful, but David and Matt and the old personnel know what it feels like to be in this position it’s a rather small and exclusive club in general. Peter Davison has been lovely too.”

The star was also joined by co-star Jenna-Louise Coleman and showrunner Steven Moffat, and the boss insisted the conversations between Doctors is ”entirely private”.

He said: ”When Matt took it over he got a letter from David full of advice and he would never tell anyone what was in the letter. So this inter-Doctor conversation is entirely private in many ways.”

The next episode ‘Into The Dalek’ airs next Saturday on BBC One.

Web articles – via partners/network co-ordinators. This website and its contents are the exclusive property of ANGA Media Corporation . We appreciate your feedback and respond to every request. Please fill in the form or send us email to: [email protected]
Previous: Michelle Duggar Is Making Transphobic Robocalls (AUDIO)
Next: Crutches caused Ferris Wheel accident ?