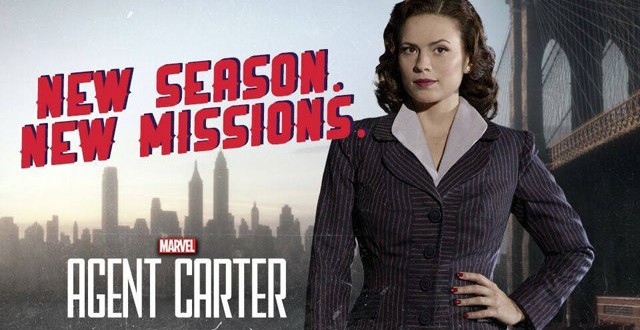 The first promotional trailer for Season 2 of ABC’s “Agent Carter” has been released, and it promises plenty of action and romance.

Following a crowd-pleasing freshman season, Marvel’s “Agent Carter” is getting ready to return in January. In a clip released by ABC, fans are getting their first peek at the period show in its new locale.

“This January it’s lights, camera, Carter,” says the clip’s voiceover, promising some movie magic. “America’s top agent is heading to Hollywood for action, romance and whole lot of kicking … ” That last part isn’t said aloud, but you can probably guess the rest.

“Agent Carter’s” first season was set in 1946 in New York, where Captain America’s former flame was grieving for Cap and simultaneously assisting Howard Stark with secret missions. For the second season, the show moves to Los Angeles while Carter deals with the threats of the atomic age. The season will consist of ten episodes, and is scheduled to be the midseason fill-in for “Agents of SHIELD.”

Judging by the look of the trailer, Season 2 will have lots more of the guns, kicking and period fashions fans have come to expect. Fan-favorite James D’Arcy is making the move with Atwell and will continue to play Jarvis — Stark’s butler and a valuable ally to Peggy. With the relocation, a number of new characters will also be joining the show, including Ken Marino as mob boss Joseph Manfredi and Wynn Everett as Whitney Frost, a.k.a. Madame Masque.

“Agent Carter” will return to TV in a 2-hour special episode on Tuesday, Jan. 5.

Web articles – via partners/network co-ordinators. This website and its contents are the exclusive property of ANGA Media Corporation . We appreciate your feedback and respond to every request. Please fill in the form or send us email to: [email protected]
Previous: Michael Lohan: Lindsay Lohan’s father Suffers Possible Heart Attack
Next: Jamar Clark Shooting: Police use chemicals on protesters as officers who shot Black Man in head named ‘Video’