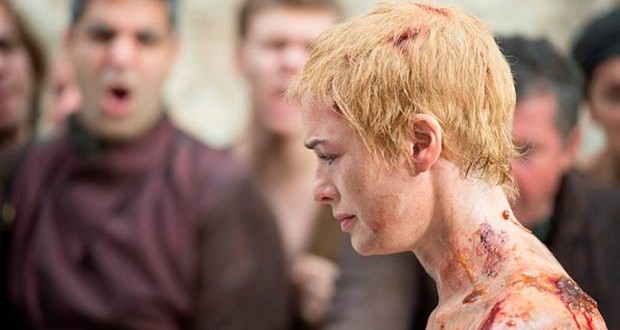 Cersei, played by Lena Headey, is shorn and stripped naked, and forced to walk through the streets where she’s pelted with ‘shit and tomatoes and eggs’ by a baying mob of bystanders.

Lena Headey has revealed she felt “f***ing terrified” and “humiliated” filming Cersei Lannister’s horrific naked walk of shame on Monday night’s episode – and that’s even considering she used a body double for some of the nude moments.

The violent scenes see the character blasted with abuse by mud-slinging onlookers as she walks down the King’s Landing streets in disgrace.

Speaking to Entertainment Weekly about the vicious scene, she said: “It’s not hard when people are screaming at you and you look like s**t and you’re being f***ing humiliated to figure out how that would feel.

“There’s a part of you that’s f***ing terrified. I can’t even imagine people wanting your blood. Cersei has done wrong, but she doesn’t really deserve this.”

Lena Headey is currently pregnant with her second child and it is thought she could’ve been expecting while filming the scene in Croatia, thus being a reason why she may have used a body double.

While Lena insists she doesn’t know what is up next for Cersei, she hinted her alter-ego could be set for some physical revenge.

She added: “I think she’s got some people to kill before she’s done.”

If Cersei’s forced march down the street wasn’t bad enough, the character’s head was also shaved to add to her humiliation.

That wasn’t the only shocking scene in Monday night’s GoT though as Jon Snow (yes, JON SNOW) was killed.

Web articles – via partners/network co-ordinators. This website and its contents are the exclusive property of ANGA Media Corporation . We appreciate your feedback and respond to every request. Please fill in the form or send us email to: [email protected]
Previous: High Court bans british woman from giving birth to grandchild
Next: Calgary Man shot with arrow believed to be victim of targetted attack