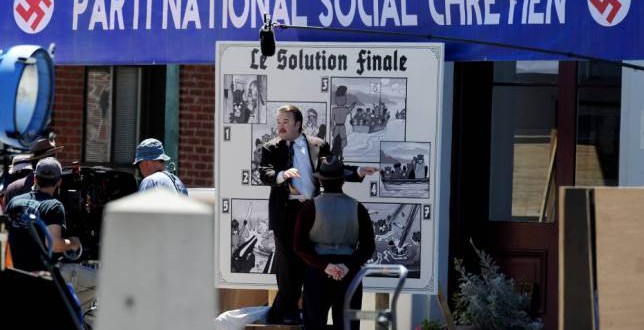 Haley Joel Osment has certainly come a long way since his starring turn in The Sixth Sense.

The former child star, who shot to fame in the 1999 flick, looked almost completely unrecognisable during filming for his latest movie this week.

Wearing an unflattering black suit, a greasy slicked-back ‘do, and a dark tash, Haley Joel couldn’t have looked more different to his innocent 11-year-old self.

Yoga Hosers, which is set to hit the US box-office in June 2015, is about two teenage yoga enthusiasts who team up with a legendary man-hunter to battle with an ancient evil presence that is threatening their major party plans.

It’s safe to say we won’t be rushing to the cinema on opening night.

Depp’s daughter Lily-Rose plays a starring role in the movie alongside direct Kevin Smith’s child Harley Quinn, who will also be a lead character.

Since his Oscar-worthy performance in The Sixth Sense, Haley Joel has appeared in Steven Spielberg movie A.I. Artificial Intelligence and Pay It Forward.

2015 will see the actor star in four movies including The World Made Straight and Entourage.

Web articles – via partners/network co-ordinators. This website and its contents are the exclusive property of ANGA Media Corporation . We appreciate your feedback and respond to every request. Please fill in the form or send us email to: [email protected]
Previous: James Gandolfini shines in last role in The Drop (Video)
Next: Researchers capture the sound of an atom