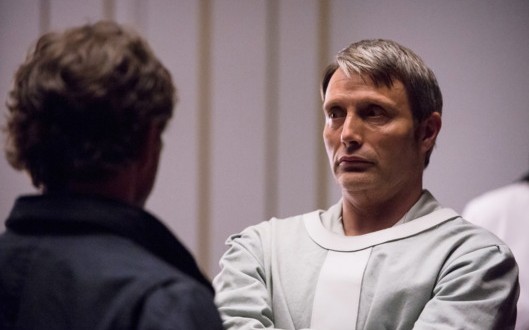 NBC’s hit series, “Hannibal” has finally bid goodbye from broadcast television. However, its final episode has left a certain feeling to fans that until now, it seems difficult to get over the series.

Many thanks to Becca Nadler for filling in for me last week, as “Hannibal” played out what is probably “Red Dragon’s” most infamous scene. And hey, it did so in a way that was more graphic than either R-rated film adaptation! On network television! I’m really gonna miss this show.

We open with a bit of business from the novel — enjoy it while it lasts because Fuller and Co. toss it by the wayside about 10 minutes in. Francis pretends to kill himself in front of Reba, so he can spare her as well as get the drop on Will. But after Francis sent Will a very detailed message last episode about the revenge he was going to wreak on him, it takes Will about three seconds to convince him to go after Hannibal instead. This makes a kind of sense, since Hannibal betrayed Francis and would certainly be the ultimate offering to the dragon, but it’s also pretty rushed and tenuous. Not to mention that Francis mentions, “I am stronger than the dragon now,” a key bit of character work left to the audience to infer how he got there. Presumably since he was able to spare Reba, the dragon has been quelled? Since so much of Francis’s material has been his dual nature, it feels like a lot of that work over the season is now being swept under the rug.

This scene in indicative of the problems with this finale. The episode has many strong scenes and a fantastic final sequence, but the plotting to get to that ending strains credibility to its breaking point. Which is honestly pretty fitting for the last episode of “Hannibal.” It was a show that was never very concerned about plot (note how the FBI was never even close to catching The Red Dragon all season), and much more concerned about tone and emotions. As far as “Hannibal” is concerned, it doesn’t really matter how we get to those final, brilliant moments, as long as we get to them. But more on that in a bit.

A Quick Appreciation of Scott Thompson and Aaron Abrams

They use their autopsy magic to establish that the body found in Francis’s house isn’t Francis, and that he’s still out there, somewhere, allowing Will to suggest his crazy Hannibal plan without tipping the FBI that Francis came to see him. Great seeing you guys again for these last few episodes! I miss your banter!

Hannibal Behind Bars
Running Around, Free As A Bird

Admittedly, Hannibal is locked up for a great deal of this episode, so he can have two excellent scenes with Will and Alana, respectively. First, Will swings by (before Francis finds him) to let Hannibal know the case is closed, and he won’t be returning. Hannibal engages in more of his passive-aggressive ex stuff, but Will shuts him down by telling him he wouldn’t have turned himself in if Will hadn’t rejected him. Will, getting in the sick burns while he can!

Hannibal’s scene with Alana is more chilling, and a reminder of why everyone is afraid of Hannibal in the first place. When Alana floats the idea of the fake escape, Hannibal points out that he might turn it into a real escape. Alana concedes the possibility, and assumes Hannibal would come after her in that case. His response is amazing: “You died in my kitchen, Alana, when you chose to be brave. Every moment since is borrowed. Your wife, your child. They belong to me.” No wonder Alana and Margot hop on a helicopter as soon as they hear that Hannibal has indeed escaped for real.

Then, of course, there is the final showdown at Hannibal’s hideaway on the cliffs overlooking the sea. Hannibal and Will enjoy a relaxing glass of wine until Francis shows up, shooting Hannibal in the back. And since Will’s not the only guy who can pull a double-cross, Francis turns on him, and they take turns stabbing each other with the same knife (here’s a tip, guys: pull the knife out yourself instead of leaving it in the other guy’s body for him to use on you). A single bullet can’t stop Hannibal, though, so he pitches in to help. He and Will team up for a brutal finishing move of Will eviscerating Francis while Hannibal tears his throat out with his teeth. That’s enough to put Francis down permanently. I’d make a joke about dragon slaying, but I respect you too much.

And as he dies, Francis’s blood spreads out underneath him in the shape of dragon’s wings.

And then, the final moments. Will and Hannibal, covered in blood, lock eyes over Francis’s corpse.

“This is all I wanted for you, Will. For both of us,” says Hannibal.

“It’s beautiful,” Will replies. They embrace.

And then Will throws them both off the cliff.

I was startled, then pleased. My least favorite endgame for “Hannibal” was always “they run off to be murder husbands together,” and until that moment, it looked like that was the direction they were going to go. It’s interesting, from the moment Will makes his deal with Francis, his motivations are inscrutable to the audience. Since he chose the side of good, last time he was tempted, we assume he’s doing so again, but then Francis is able to intercept the motorcade and free Hannibal for real, and we have to assume that Will tipped him off to the motorcade’s location, not to mention where he and Hannibal might hole up. And when Will and Hannibal take down Francis together, it is the ultimate consummation of their relationship. It’s unclear whether this was always Will’s ultimate endgame, but I like to believe it was. He was a man who was nearly consumed by the darkness but was able to overcome it in the end. The good news for those that disagree is that everything is ambiguous enough that many interpretations can be made. It’s a stunning moment. Sticking the ending is one of the hardest things a show can do, and “Hannibal” managed it. It was meant to only end the season, but it’s a pitch-perfect way to end the series.

BUT WAIT, because after the credits we cut to poor Bedelia, who has beautifully prepared her own leg for a dinner party only she will attend, forever waiting for the other guest to arrive. [Editor’s Note: THIS WAS DEEPLY UPSETTING.]

So that was “Hannibal,” a show that seemed like a bad idea on paper but became one of my favorites. It was an easy show to mock, if you were so inclined, because it was so specific and committed to its outsized reality: its ponderous dialogue, its slow-motion close-ups, its unparalled visuals. That “Hannibal” aired on network television at all is a miracle; that it lasted three seasons is more than we could have hoped for (and in the case of Season 3’s first half, more than we probably needed). It wasn’t a perfect show by any means, but it was unlike anything else on television. I will miss it.

Web articles – via partners/network co-ordinators. This website and its contents are the exclusive property of ANGA Media Corporation . We appreciate your feedback and respond to every request. Please fill in the form or send us email to: [email protected]
Previous: Suicide risk behavior patterns can alert doctors, Say Study
Next: 90 Percent of birds Have Plastics in Their Gut, Study Reveals