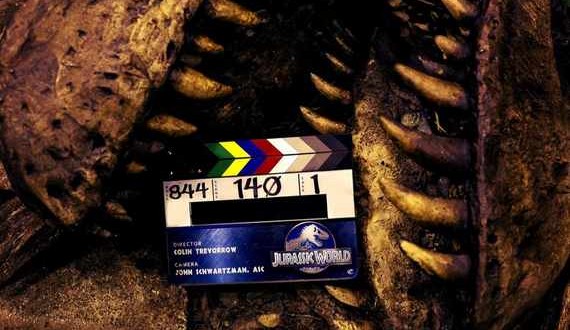 On Tuesday, August 5, director Colin Trevorrow and producer Frank Marshall both announced through twitter that “Jurassic World” has officially finished up filming and moved on to the post-production stage. To celebrate, they shared a picture of the production clapboard snuggled between the razor sharp teeth of a T-rex.

Fashion & Style followed up on Trevorrow’s Twitter post, claiming that with the production wrapped, we should be seeing a first trailer for “Jurassic World” shortly. So far, any kind of media presence for the film has been almost non-existent- aside from a single poster, there have been no trailers or clips of any kind- not even at San Diego Comic-Con last month, which would have been a perfect venue.

Fashion & Style claims that because “Jurassic World” is such a high-priority film, a trailer would be coming much sooner than a smaller production that would require a much more scaled-down marketing campaign. As such, it’s probably best to assume that we’ll be seeing our first “Jurassic World” footage sometime in the late fall/early winter of this year- much like the same schedule of this year’s biggest monster movie, “Godzilla.”

Web articles – via partners/network co-ordinators. This website and its contents are the exclusive property of ANGA Media Corporation . We appreciate your feedback and respond to every request. Please fill in the form or send us email to: [email protected]
Previous: Researchers learn secret of how geckos cling to vertical walls
Next: Swastika “etched in butter” in McDonald’s sandwich (Video)