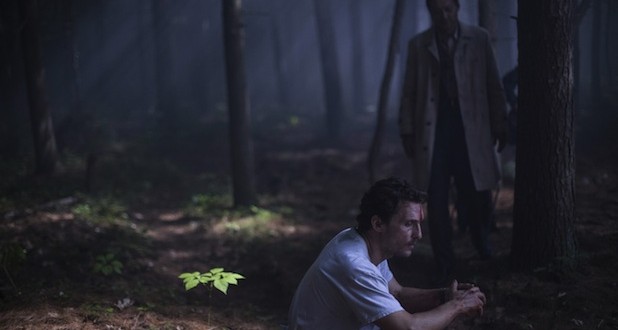 Variety’s Scott Fourdas reported there were boos at the first press screening for “The Sea of Trees,” which stars Matthew McConaughey as a man who travels to a Japanese forest intending to kill himself and meets another man (Ken Watanabe) also planning to commit suicide. Naomi Watts plays McConaughey’s wife in flashbacks.

The early reviews were brutal.

“Almost impressive in the way it shifts from dreary two-hander to so-so survival thriller to terminal-illness weepie to M. Night Shyamalan/Nicholas Sparks-level spiritual hokum,” Justin Chang wrote in Variety, “this risibly long-winded drama is perhaps above all a profound cultural insult, milking the lush green scenery of Japan’s famous Aokigahara forest for all it’s worth, while giving co-lead Ken Watanabe little to do other than moan in agony, mutter cryptically, and generally try to act as though McConaughey’s every word isn’t boring him (pardon the expression) to death.”

Eric Kohn of Indiewire was even tougher, calling it “a hackneyed story of one man’s journey toward spiritual uplift following the abrupt death of his wife (Naomi Watts). Not even Matthew McConaughey can sustain the mushy, amateurish story, which digs itself a deeper hole as it moves along. The established talents of both director and star only serve to magnify the many wrong moves that this stunning misfire takes.”

The Guardian’s Peter Bradshaw called “The Sea of Trees” a “fantastically annoying and dishonest terk-jerker” and “almost like a parodic version” of Van Sant’s earlier “Gerry.”

“The Sea of Trees” secured U.S. distribution just before the Cannes Film Festival and is screening in competition. Van Sant won the Palme D’Or for “Elephant.”

Web articles – via partners/network co-ordinators. This website and its contents are the exclusive property of ANGA Media Corporation . We appreciate your feedback and respond to every request. Please fill in the form or send us email to: [email protected]
Previous: No winning ticket drawn for $50 Million Lotto Max prize
Next: Tony and Hugh Rodham : Hillary Clinton’s brothers could cause major problems for her presidential campaign