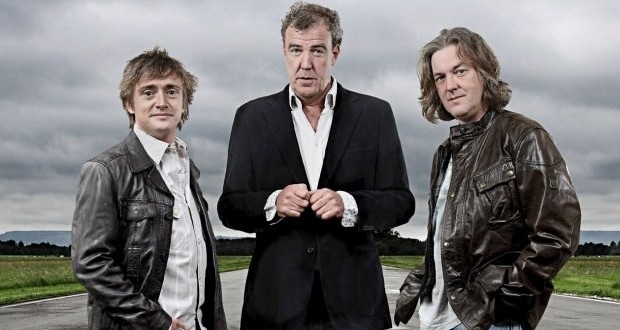 Jeremy Clarkson’s co-hosts reportedly refused to finish filming the rest of the current series of Top Gear without their suspended co-star.

James May and Richard Hammond were apparently approached by the BBC to host remaining studio segments for the series as a duo after Clarkson was suspended over an alleged “fracas” with one of the show’s producers.

A BBC executive revealed: ”They didn’t want to do it without Jeremy so the talks didn’t get off the ground.

”There is a feeling that it is all of them or none of them.”

The 54-year-old broadcaster was suspended from his position on the long-running driving programme earlier this month after he allegedly hit the show’s producer Oisin Tymon over an argument about his dinner.

The fate of Jeremy’s future on the show now lies with BBC Director General Tony Hall, but the source explained there is a huge amount of pressure to complete the investigation into the incident due to the public reaction to the news.

They told the Daily Mirror newspaper: ”We must play everything with a straight bat but it is very frustrating while Clarkson’s friends continue to pour pressure on the BBC.

”Our priority has to be the person who has allegedly been attacked but we are between a rock and a hard place in all of this.

”There is no way everyone is going to be happy whatever is decided.”

Web articles – via partners/network co-ordinators. This website and its contents are the exclusive property of ANGA Media Corporation . We appreciate your feedback and respond to every request. Please fill in the form or send us email to: [email protected]
Previous: Toddler revived after 101 minutes of CPR : “It Was A Miracle”
Next: TTC driver charged in death of Amaria Diljohn