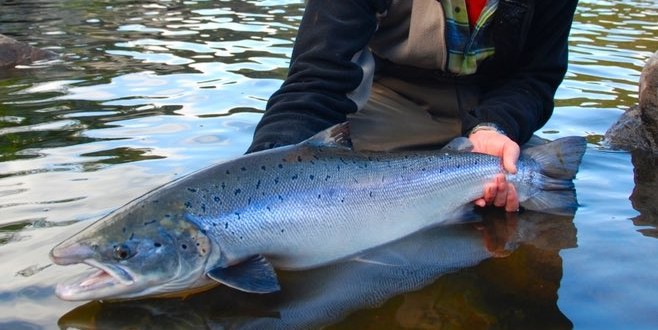 Posted by: News Apr 4, 2015 in Press Releases Leave a comment

St. Andrews, NB – The Atlantic Salmon Federation (ASF) is questioning why both the Federal Government and the Provincial Government in New Brunswick are not being more transparent about disease and escapes of farmed Atlantic salmon within the New Brunswick Aquaculture Industry.

The industry is off to a rocky start in 2015 with reported disease and confirmed escapes, but the public is being kept in the dark by both levels of government.

According to the Canadian Food Inspection Agency web site, Infectious Salmon Anemia (ISA) was confirmed in Atlantic salmon on February 25, 2015 at an undisclosed New Brunswick location. There has been no other public notice or information from either level of government. Although this was reported as a non-virulent strain, ASF has learned that a second recent ISA incident has occurred in New Brunswick, one that is suspected to be virulent.

“The CFIA web site posting is inadequate, leaving many questions unanswered which could lead to further speculation, whether warranted or not,” says Jonathan Carr, ASF’s Executive Director of Research and Environment. “Virulent forms of ISA can spread quickly in the dense populations among salmon held in great numbers in open-net pens. It can spread in surrounding waters and can affect not only wild Atlantic salmon but other species as well.”

ISA isn’t the only issue the New Brunswick Aquaculture industry is grappling with behind closed doors. On January 27, 2015 more than 51,000 farmed Atlantic salmon were reported to have escaped from an open-net pen site in New Brunswick. In an email sent from the office of the Registrar of Aquaculture with the Provincial Department of Agriculture, Aquaculture and Fisheries to ASF, it states that the escape occurred near Grand Manan Island due to extreme weather and was discovered on January 28.

“I have been informed that the farmed salmon were stocked in 2013 which means that they were near market size and over six kilograms when they escaped,” says Carr. “If they do survive and make it into the rivers this year to spawn, there is a high risk of genetic introgression, which scientific studies have proven weakens the gene pool and could compromise the future survival of wild Atlantic salmon. This is information that the public needs to be made aware of.”

Very few escapes have been reported in the past. According to Carr, escapee salmon have been detected annually over the past 23 years in the Magaguadavic River and 99 percent of those fish could not be linked to any reported net-pen breach of containment events. Escapees have outnumbered wild salmon in all but four years.

As for ISA, the last reported case in New Brunswick was back in 2005, although it has been an issue in Nova Scotia and Newfoundland more recently.

“There needs to be more transparency and accountability within the government and salmon aquaculture industry,” says Carr. “Code of containment practices must be improved to minimise risk of fish escape and incidents of disease and these codes need to be put into legislation and enforced. As long as salmo

n are grown in sea cages there will always be escapes, and diseases such as ISA and parasites such as sea lice will continue to be an issue because it’s impossible to control the surrounding environment. The obvious solution is the transition of the aquaculture industry to land-based closed containment operations, where escapes and sea lice cannot occur and any disease outbreak can be contained.”

Web articles – via partners/network co-ordinators. This website and its contents are the exclusive property of ANGA Media Corporation . We appreciate your feedback and respond to every request. Please fill in the form or send us email to: [email protected]
Previous: Jessica Alba Is Flawless in Yet Another Sexy Blue Bikini Pic
Next: Scientists Use Medieval Remedy to Kill Modern Superbug