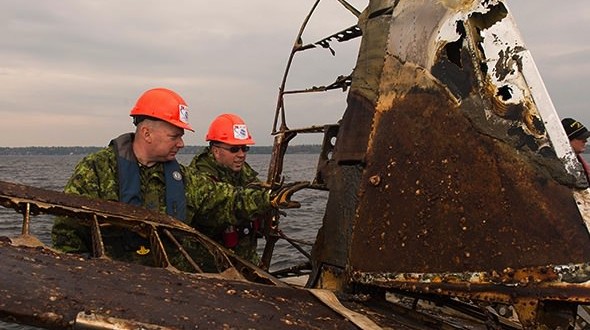 Lake Muskoka, near Gravenhurst, Ontario, is yielding up a 70-year-old secret.

As pieces of the aircraft were revealed to the light of day, those working at the crash site paused for two minutes of silence in remembrance of the two airmen – Lieutenant Peter Campbell of the Royal Air Force and Leading Aircraftsman Theodore (Ted) Bates of the Royal Canadian Air Force (RCAF) – who died in the crash.

The Royal Canadian Navy’s Fleet Diving Unit (Atlantic), located in Halifax, Nova Scotia, recovered the remains of the fallen airmen in October 2012; the airmen were interred a year later with full military honours.

The RCAF is leading the recovery operation, which began on Saturday, October 25 and is expected to last approximately 10 days. The RCAF has partnered with the Royal Canadian Navy, the Directorate of History and Heritage at the Department of National Defence, the Ontario Provincial Police Bracebridge Detachment, the National Air Force Museum of Canada, located in Trenton, Ontario, and the Canadian Coast Guard. Notable support also came from the towns of Gravenhurst and Bracebridge, and the Lost Airmen of Muskoka Project.

The main recovery effort for Nomad #3521 is supported by a recovery and salvage team from the RCAF’s Aerospace and Telecommunications Engineering Support Squadron based at 8 Wing Trenton, Ontario, with critical diving support from the Fleet Diving Unit (Atlantic).

The wreckage will remain the property and responsibility of the Royal Canadian Air Force until the full recovery is achieved, after which the aircraft will be handed over to the National Air Force Museum of Canada.

The Royal Canadian Air Force will hand the aircraft over the the National Air Force Museum Monday at the Pride of Muskoka at 10:00 a.m.

Web articles – via partners/network co-ordinators. This website and its contents are the exclusive property of ANGA Media Corporation . We appreciate your feedback and respond to every request. Please fill in the form or send us email to: [email protected]
Previous: Wayne Static dead : Metal icon dies aged 48, his reps confirm
Next: BlackBerry : BBM gets Snapchat-style features