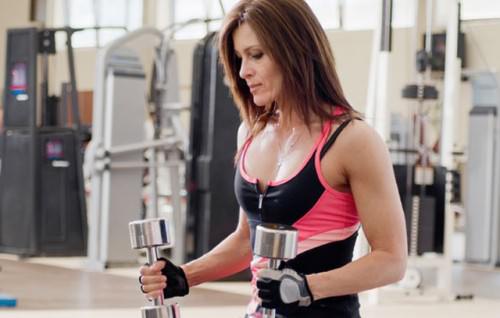 What exercise program can best fight the “epidemic” of teen obesity? According to a study published in the Journal of the American Medical Association (JAMA) Pediatrics, by combining aerobic exercise with resistance training.

The Healthy Eating Aerobic and Resistance Training in Youth (HEARTY) study, led by researchers at the University of Calgary and University of Ottawa, involved 304 overweight teens in the Ottawa/Gatineau area between the ages of 14 to 18. All were given the same four weeks of diet counseling to promote healthy eating and weight loss before being randomly placed into four groups. The first group performed resistance training involving weight machines and some free weights; the second performed only aerobic exercise on treadmills, elliptical machines and stationary bikes; the third underwent combined aerobic and resistance training; and the last group did no exercise training.

“Obesity is an epidemic among youth,” says Dr. Ron Sigal of the University of Calgary’s O’Brien Institute for Public Health and Libin Cardiovascular Institute of Alberta. “Adolescents who are overweight are typically advised to exercise more, but there is limited evidence on what type of exercise is best in order to lose fat.”

In the overall study population, each type of exercise reduced body fat significantly and similarly. All three exercise programs caused significantly more fat loss than in the diet-only control group. Among youths who completed at least 70 per cent of the study’s exercise sessions, the percentage of body fat decreased “significantly more in those who did combined aerobic and resistance exercise than in those who only did aerobic exercise,” says co-principal researcher Dr. Glen Kenny of the University of Ottawa.

The appeal of resistance training

Supervised by personal trainers, youths in the three exercise groups were asked to train four times per week for 22 weeks at community-based facilities. Changes in body fat were measured using Magnetic Resonance Imaging (MRI) machines. Because aerobic exercises such as cycling or jogging can be challenging for overweight people, resistance training is potentially attractive because excess body weight poses far less of a disadvantage, and gains in strength come much more quickly than gains in aerobic fitness.

Researchers hope that the study will contribute to a national debate about childhood and teenage obesity, potentially leading to a consistent, long-term strategy on how to best deal with the problem. Eighty per cent of overweight youth typically continue to be obese as adults, adversely affecting the quality of their lives and contributing to chronic disease problems. Adult obesity increases risk of diabetes, heart disease, cancer and disability.

The study was led by doctors Sigal and Kenny, and the research team included co-principal investigators, Gary Goldfield and Stasia Hadjiannakis of the Children’s Hospital of Eastern Ontario Research Institute, Janine Malcolm of Ottawa Hospital Research Institute, and Angela Alberga, previously a PhD student at the University of Ottawa and currently a postdoctoral fellow at the University of Calgary.

The study was funded by the Canadian Institutes of Health, and Sigal is funded by Alberta Innovates – Health Solutions.

Web articles – via partners/network co-ordinators. This website and its contents are the exclusive property of ANGA Media Corporation . We appreciate your feedback and respond to every request. Please fill in the form or send us email to: [email protected]
Previous: Beverly Carter : Missing realtor prompts search in Arkansas
Next: Victoria, BC : Rare white-sided dolphins spotted (Video)