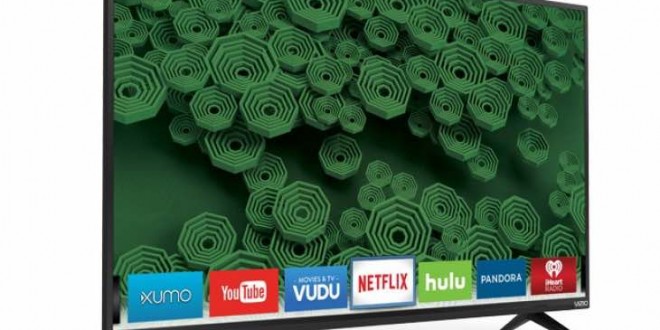 November and December are always two of the busiest months for TV sales, and we have seen a rise in the popularity of the 4K TV. This is not only due to an increase in the amount of supported content, but more so because of prices decreasing.

VIZIO, Inc. has announced the availability of its all-new D-Series collection. The newly introduced lineup provides value-conscious consumers an array of screen size options, with access to a range of step-up features like Smart TV and 4K Ultra HD on select models. The D-Series lineup offers Full-Array LED backlighting with up to 16 Active LED Zones for excellent picture quality and is rolling out now to VIZIO.com, and coming soon to Walmart.

Select models between 24″ to 55″ class screen sizes in the D-Series collection are equipped with VIZIO’s latest generation Smart TV platform, VIZIO Internet Apps Plus, giving consumers the power to stream the hottest movies, TV shows, music and more right to their TV. The seamless Smart TV experience is possible thanks to built-in WiFi for quick and easy setup, and access to popular apps such as Netflix, XUMO, VUDU, iHeartRadio, Hulu, Spotify, YouTube and more. XUMO, a new addition to VIZIO Internet Apps Plus, offers a fresh approach that completes the viewing experience by bringing the premium digital content viewers have come to love to the screen of their choice.

Select large-size models from 43″ to 70″ class screen sizes in the all-new D-Series lineup deliver 4K Ultra HD resolution with over 8.3 million pixels, bringing more detail to every image and displaying four times the resolution of 1080p Full HD. Consumers with D-Series Ultra HD Smart TVs will have access to Ultra HD apps and a growing range of Ultra HD shows and movies.

Consumers can find the new D-Series collection online now through VIZIO.com and rolling out through Walmart both in-store and online. MSRP pricing for the collection starts at $149.99 for the D-Series 24″ Edge-Lit LED TV (D24hn-D1) up to $1,299.99 for the 70″ Full-Array LED Smart TV. For more information visit VIZIO.com.

Web articles – via partners/network co-ordinators. This website and its contents are the exclusive property of ANGA Media Corporation . We appreciate your feedback and respond to every request. Please fill in the form or send us email to: [email protected]
Previous: 136 Pounds Of Cocaine Shipment from Boston Seized (Report)
Next: Researchers Think This Ancient Human Lived Among Our Modern Cousins