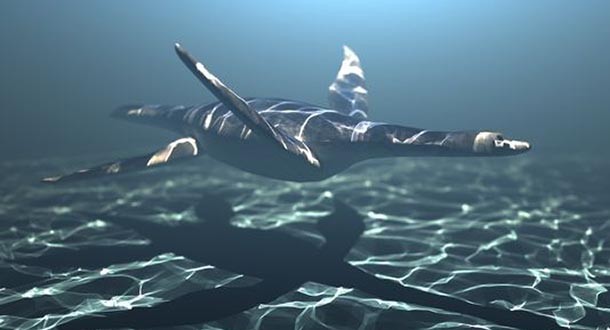 Plesiosaurs–ancient marine reptiles that ruled the seas during the time of the dinosaurs–used their flippers to ‘fly’ through the water in the same way that penguins do, a study published in the journal PLOS Computational Biology reports.

The scientists find that the most effective swimming motion for the plesiosaur is flapping the two front flippers in an underwater flight motion, similar to that of a penguin. Surprisingly, however, the simulations revealed that the rear flippers would not have substantially increased their forward speed. Instead, the back flippers of plesiosaurs were probably used for steering and stability.

Plesiosaurs are an extinct group of marine reptiles that were apex predators for 135 million years during the age of the dinosaurs. Their unique four-flipper body plan is unlike any modern-day swimming animal and paleontologists have debated their possible swimming style since the first complete plesiosaur skeleton was described in 1824. The study uses computer simulations to help resolve this question. Thousands of different swimming motions were simulated to identify the most effective swimming strategy for the plesiosaur body plan.

Future computer simulations could be used to discover the degree of agility that plesiosaurs gain from their rear flippers. The method can also be applied to understand the swimming motion of other prehistoric animals.

“Plesiosaur swimming has remained a mystery for almost 200 years, so it was exciting to see the plesiosaur come alive on the computer screen” said paleontologist Adam Smith.

“Our results show that the front limbs provide the powerhouse for plesiosaur propulsion while the hind limbs are more passive” said Adam Smith.

Web articles – via partners/network co-ordinators. This website and its contents are the exclusive property of ANGA Media Corporation . We appreciate your feedback and respond to every request. Please fill in the form or send us email to: [email protected]
Previous: Dollar dive: Canadian dollar falls below 72 cents US for first time since 2004
Next: Ontario Delaying Ban of E-Cigarettes in Public Places