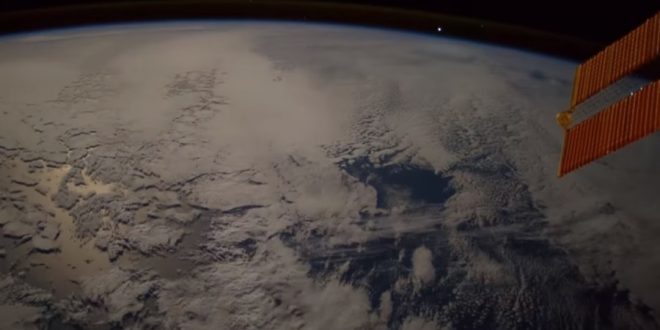 An amazing time-lapse video taken by a European Space Agency (ESA) astronaut on board the International Space Station (ISS) captured what appears to be a “fireball” entering the earth’s atmosphere, along with a massive lightning show.

Astronaut Paolo Nespoli posted this gif on November 16, a close-up view of time-lapse footage he’d gathered on November 5 and shared with the European Space Agency ground team that supports his work up in space. At the time, he and his colleagues had been traveling on a path from the southern Atlantic Ocean to Kazakhstan.

What he caught was likely a bright meteor falling to Earth off the coast of South Africa. Simply seeing a shooting star from the space station, Nespoli says for the benefits of us Earthlings, isn’t that unusual, but he was excited he was finally able to catch one on screen.

And his ESA colleagues set to work on the meteor as well, which appears about seven seconds into the video on the right-hand side of the screen. Detlef Koschny, who studies meteors and their kin, told the agency in a statement that it looks to be about as bright as Venus. That is scientists’ cut-off for rating meteors as “fireballs,” so this one got the official stamp of approval.

He added that it’s not coming in at the right sort of angle to be a piece of space junk plummeting back to Earth, and that it appears to have a little tail, just as a meteor should.

Rüdiger Jehn, a second ESA meteor scientist, was also able to calculate the speed at which the fireball fell to Earth, at almost 90,000 miles per hour or 25 miles per second, twice as fast as the typical speed of these things.

The brighter flashes of light also visible in the footage are more mundane—that’s what lightning strikes look like from space. Although the fireball is a rare capture, there’s plenty more space photographs and videos where it came from—Nespoli sends postcards back to Earth about once a day.

Web articles – via partners/network co-ordinators. This website and its contents are the exclusive property of ANGA Media Corporation . We appreciate your feedback and respond to every request. Please fill in the form or send us email to: [email protected]
Previous: Researcher lauds world-first ‘head transplant’ a success
Next: Researchers Solve the Mystery of America’s Scuba-diving Fly