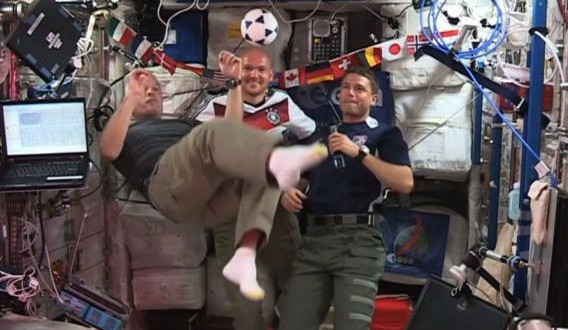 In a video message from orbit, German crew member Alexander Gerst wished all teams and fans in Brazil “peaceful games.”

His American colleague Reid Wiseman added: “Have fun, play hard, and we’ll be watching on the International Space Station.”

Gerst, Wiseman and station commander Steve Swanson of NASA also showed off their football skills in low gravity, displaying some impressive feats in the video that players down on Earth might be envious of.

Along with the German and two Americans, there are three Russians on the space station right now: All their countries are represented at the World Cup.

Web articles – via partners/network co-ordinators. This website and its contents are the exclusive property of ANGA Media Corporation . We appreciate your feedback and respond to every request. Please fill in the form or send us email to: [email protected]
Previous: Whale tagged with graffiti in NJ died of virus, official says
Next: Bachelor party finds rare mastodon fossil (Video)