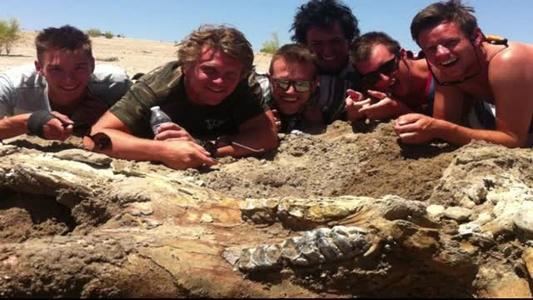 In a strange twist of fate, a bachelor party led to what appears to be a major paleontological find.

A group of friends were camping at Elephant Butte.

Antonio Gradillas and his friends were celebrating a bachelor party weekend when they made a prehistoric discovery.

“As we are cruising by we see a large tusk or what seems to be a large tusk coming out of the ground about a good three to four inches out,” Antonio Gradillas told KRQE.

Gradillas and his friends started digging and found the giant fossil of a tusk and skull at Elephant Butte Lake.

Paleontologists say it looks like the fossil of a Stegomastodon, a 9-foot tall, 13,000 pound, prehistoric elephant that roamed New Mexico several million years ago.

The area has been blocked off so paleontologists can work to excavate the fossil.

Web articles – via partners/network co-ordinators. This website and its contents are the exclusive property of ANGA Media Corporation . We appreciate your feedback and respond to every request. Please fill in the form or send us email to: [email protected]
Previous: Astronauts play football in zero gravity on ISS (Video)
Next: Man Eats the Heart of His Ex’s New Boyfriend