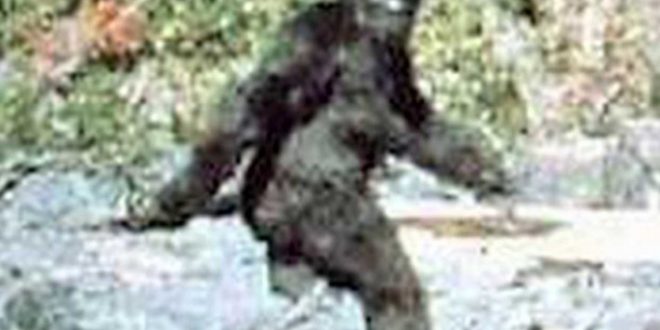 The Internet is abuzz over video of a two-legged figure walking across camera in the Michigan woods with some claiming that the figure could be Bigfoot.

The live-cam was installed in the Michigan wilderness by the state Department of Natural Resources and CarbonTV.com a private company specializing in outdoor video content. While the lens was focused on a nest of baby eagles, a humanoid creature appears to have been captured in the corner of the frame.

While the footage is too grainy to determine whether the object is an unidentified primate species or just, like, some dude, social media users were quick to claim that the video showed the legendary Bigfoot.

Experts are, of course, unconvinced.

“Like most videos purported to be Bigfoot, it’s grainy and out of focus – of course, the camera wasn’t set up to be focused on the ground; it was focused on the nest,” said Ed Eisch, DNR Fish Production manager for the state, according to USA Today. “I have a nephew who does a really good Bigfoot gait impression. But I know it wasn’t him.”

Jeff Meldrum, a professor of anatomy and anthropology at Idaho State University and one of the country’s leading Bigfoot researchers, also remains skeptical.

“It is an interesting video, but remains just that, given the lack of scale and detail in the image of the figure,” he said, according to USA Today. “We’re coming up on the 50th anniversary of the still-controversial, Patterson-Gimlin film – a 60-second clip of much higher quality, about which opinions remain polarized.” Shot in 1967, that footage shows what appears to be an apelike creature walking on two legs near the Klamath River near Orleans, California. The film has faced intense scrutiny since its release. “By contrast, this eagle’s nest video doesn’t offer much by way of compelling evidence,” Meldrum said.

The clip was filmed in May. A user noticed the strange figure and then then posted the video to a Bigfoot enthusiast website. It was only last month that an editor with CarbonTV.com noticed the posting and highlighted the clip.

“From what we can see, what anybody can see with their plain eye, it’s up to interpretation,” said Daniel Seliger, CarbonTV executive director of content and marketing, according to USA Today. “It’s definitely grounds for speculation as a legitimate sighting. But who knows? It’s the kind of thing the Internet really loves.”

Web articles – via partners/network co-ordinators. This website and its contents are the exclusive property of ANGA Media Corporation . We appreciate your feedback and respond to every request. Please fill in the form or send us email to: [email protected]
Previous: Alex Thurber: BlackBerry will have new keyboard model within six months
Next: Scientists find evidence of a limit to human lifespan