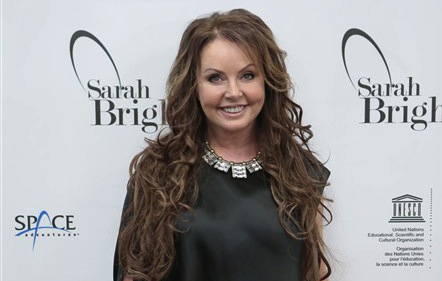 British singer Sarah Brightman has confirmed plans to travel to the International Space Station on board Russia’s Soyuz spacecraft next year in order to fulfill her dream to become the first professional musician to sing from space.

Brightman, a classically trained soprano known for her starring role in Andrew Lloyd Webber’s musical Phantom of the Opera, will spend more than $52 million for the trip, which will be the eighth privately-financed voyage into space.

Sarah will begin training in Russia for her space flight beginning early as this autumn.

Sarah has long wanted to travel into outer space and said so publicly in 2012. Her decision to travel to the ISS will make her the first private citizen to visit the orbiting space station since Cirque du Soleil founder Guy Laliberté in September 2009. Laliberté paid US$35 million for this once in a lifetime experience.

Pop star Lady Gaga also plans to be the first singer to perform from “outer space” but she technically won’t be in “outer space.” The American superstar plans to sing only one song while a passenger onboard a Virgin Galactic space plane.

Lady Gaga will become a space tourist early next year if her plans fall through. The fight as to who’ll really be the first diva to sing in space boils down to the definition of “outer space.”

The accepted definition of outer space is that part of the atmosphere that lies 100 kilometers or 62 miles above mean sea level. The ISS orbits 400 kilometers above the Earth, which means Sarah will truly be in space.

On the other hand, Lady Gaga will be a passenger on board a sub-orbital plane that will pop into space for less than 10 minutes before returning to Earth.

Sarah will be on board the ISS for 10 days. Lady Gaga’s trip will take all of 10 minutes.

Google co-founder Sergey Brin is expected to be the next notable to visit the ISS after Brightman. Brin will likely take to space in 2017.

Web articles – via partners/network co-ordinators. This website and its contents are the exclusive property of ANGA Media Corporation . We appreciate your feedback and respond to every request. Please fill in the form or send us email to: [email protected]
Previous: Chia Powder Linked to Salmonella Illness, CDC Says
Next: Casey Cohen : Reality star denies Jay Z affair