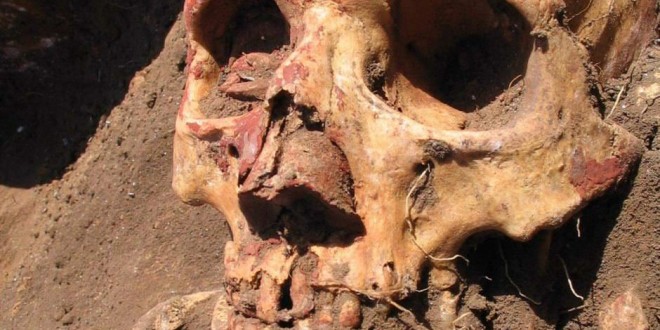 Plague has been endemic in the human population since the beginning of the Bronze Age, more than 5,000 years ago, a new research has found.

Plague infections were common in humans 3,300 years earlier than the historical record suggests, reports a study published October 22 in Cell. By sequencing the DNA of tooth samples from Bronze Age individuals from Europe and Asia, the researchers discovered evidence of plague infections roughly 4,800 years ago. But it was at least another thousand years until the bacterium that causes the disease, Yersinia pestis, acquired key changes in virulence genes, allowing it to spread via fleas and evade the host immune system.

“We found that the Y. pestis lineage originated and was widespread much earlier than previously thought, and we narrowed the time window as to when it developed,” says senior study author Eske Willerslev of the Center for GeoGenetics, University of Copenhagen. “This study changes our view of when and how plague influenced human populations and opens new avenues for studying the evolution of diseases.”

Y. pestis was the notorious culprit behind the sixth century’s Plague of Justinian, the Black Death, which killed 30%-50% of the European population in the mid-1300s, and the Third Pandemic, which emerged in China in the 1850s. Earlier putative plagues, such as the Plague of Athens nearly 2,500 years ago and the second century’s Antonine Plague, have been linked to the decline of Classical Greece and the undermining of the Roman army. However, it has been unclear whether Y. pestis could have been responsible for these early epidemics because direct molecular evidence for this bacterium has not been obtained from skeletal material older than 1,500 years.

Based on their recent work, Willerslev, Kristian Kristiansen of the University of Gothenburg, and their collaborators suspected that the plague could have shaped human populations much earlier than previously thought. A few months ago, they published a high-profile population genomics study of Eurasian individuals from the Bronze Age (c. 3000 BC to 1500 BC), which they showed was a highly dynamic period involving large-scale migrations and population replacements that were responsible for shaping major parts of present-day demographic structure in both Europe and Asia.

But the reason for these migrations was not clear. “One of the scenarios we discussed was the idea that large epidemics could have facilitated such dynamics,” says study co-first author Morten Allentoft of the Center for GeoGenetics, University of Copenhagen. “Perhaps people were migrating to get away from epidemics or re-colonizing new areas where epidemics had decimated the local populations. Could it be, for example, that plague was present in humans already in these prehistoric times?”

To answer this question, the researchers screened 89 billion raw DNA sequence reads obtained from the teeth of 101 Bronze Age individuals from Europe and Asia. These teeth were obtained from various museums and archaeological excavations. They discovered Y. pestis DNA in seven of these individuals, whose teeth were dated between 2794 BC and 951 BC (early Iron Age). Evolutionary analysis revealed that the most recent common ancestor of all known Y. pestis strains is 5,783 years old–thousands of years older than previous estimates.

Moreover, Y. pestis genomes from the Bronze Age lacked a gene called Yersinia murine toxin (ymt), which is known to protect the pathogen inside the flea gut and thereby enable the spread of plague to humans via an insect vector. However, this gene was present in the Y. pestis genome from the Iron Age individual, suggesting that plague became transmissible by fleas between approximately 3,700 and 3,000 years ago. This new finding conflicts with previous studies suggesting that the ymt gene was acquired early in Y. pestis evolution due to its importance in the pathogen’s life cycle.

Besides widespread transmission through fleas, another secret to Y. pestis’ success has been its stealthy evasion of the host immune system. In mammals, the immune system has evolved to recognize and mount protective responses against a protein called flagellin, which is the principal component of the flagella–the whip-like appendage that helps bacteria move around. In all previously known Y. pestis strains, a mutation in the flhD gene has prevented the expression of the flagellin protein.

However, this mutation was not present in the two oldest Bronze Age individuals, and the flagella system was still in the process of devolving in the youngest Bronze Age individual. Taken together, the findings suggest that Y. pestis did not fully adapt as a flea-borne mammalian pathogen until the beginning of the first millennium BC, giving rise to the historically recorded plagues.

“The underlying evolutionary mechanisms that facilitated the evolution of Y. pestis are still present today, and learning from this will help us understand how future pathogens may arise or develop increased virulence,” says co-first study author Simon Rasmussen of the Technical University of Denmark. “Additionally, our study changes the historical understanding of this extremely important human pathogen and makes it possible that other so-called plagues, such as the Plague of Athens and the Antonine Plague, could have been caused by Y. pestis.”

In future studies, the researchers will look for evidence of plague in other geographic regions and time periods to get a better grasp of the history of this disease. They will also search for ancient DNA remains of other blood-borne bacteria and viruses. “Our findings reveal that one can find ancient pathogenic microbes in ancient human material showing no obvious morphological signs of disease,” Willerslev says. “So plague is just one disease to look at, and one could explore all kinds of diseases like this in the future.”

Web articles – via partners/network co-ordinators. This website and its contents are the exclusive property of ANGA Media Corporation . We appreciate your feedback and respond to every request. Please fill in the form or send us email to: [email protected]
Previous: Talk Talk ransom demand investigated by police ‘Report’
Next: Fewer teens are texting while driving, new study says