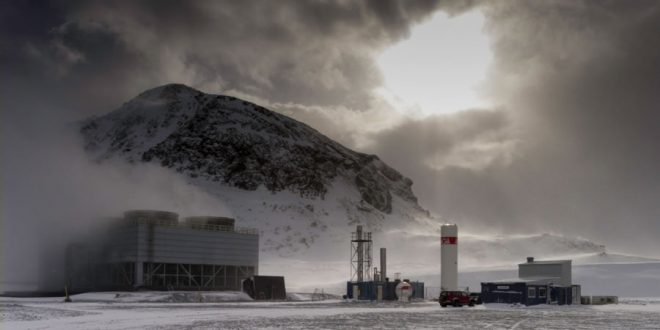 The Swiss company Climeworks has launched a pilot plant in Hellisheidi, Iceland, that can capture carbon dioxide directly from the air to be pumped into underground rock formations, effectively locking the greenhouse gas away for good.

The project, called CarbFix, has developed a way to absorb carbon dioxide from the atmosphere, pump it deep underground, and transform it into stone.

The project is a collaboration between Reykjavík Energy and Swiss company Climeworks, with participation from the University of Iceland, Columbia University in New York, and the French National Centre for Scientific Research. The collectors will be active at Hellisheiði for a one-year trial and in that time are expected to remove 50 tonnes of carbon dioxide from the atmosphere. Annual emmisions, however, amount to 30-40 gigatonnes worldwide.

“It is quite clear that if we are to achieve climate goals, then we have to take steps such as extracting carbon dioxide directly from the atmosphere as we’re doing now. This will undoubtedly be one of the solutions,” stated Sandra Ósk Snæbjörnsdóttir, engineer at Reykjavík Energy.

Web articles – via partners/network co-ordinators. This website and its contents are the exclusive property of ANGA Media Corporation . We appreciate your feedback and respond to every request. Please fill in the form or send us email to: [email protected]
Previous: Study finds Pumas exhibiting behavior like social animals
Next: A Giant, Mysterious Hole Just Appeared in Antarctica