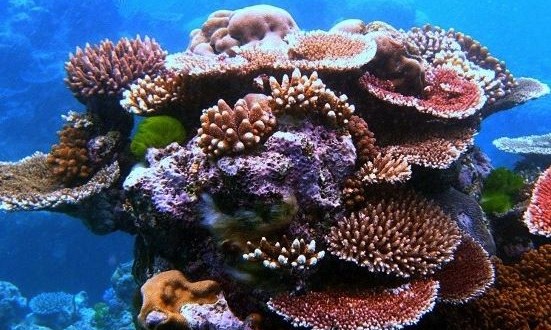 Coral reefs have the unusual ability to adjust their inner functions to withstand the temperature of the warming ocean 50 times faster than would be possible through natural selection.

To most people, 86-degree Fahrenheit water is pleasant for bathing and swimming. To most sea creatures, however, it’s deadly. As climate change heats up ocean temperatures, the future of species such as coral, which provides sustenance and livelihoods to a billion people, is threatened.

Through an innovative experiment, Stanford researchers led by biology Professor Steve Palumbi have shown that some corals can – on the fly – adjust their internal functions to tolerate hot water 50 times faster than they would adapt through evolutionary change alone. The findings, published April 24 in Science, open a new realm of possibility for understanding and conserving corals.

“The temperature of coral reefs is variable, so it stands to reason that corals should have some capacity to respond to different heat levels,” said Palumbi, director of Stanford’s Hopkins Marine Station and a senior fellow at the Stanford Woods Institute for the Environment. “Our study shows they can, and it may help them in the future as the ocean warms.”

Coral reefs are crucial sources of fisheries, aquaculture and storm protection. Overfishing and pollution, along with heat and increased acidity brought on by climate change, have wiped out half of the world’s reef-building corals during the past 20 years. Even a temporary rise in temperature of a few degrees can kill corals across miles of reef.

American Samoa presents a unique case study in how corals might survive a world reshaped by climate change. Water temperatures in some shallow reefs there can reach 95 degrees Fahrenheit, enough to kill most corals. To find out how native corals survive the heat, researchers in Palumbi’s lab transplanted colonies from a warm pool to a nearby cool pool and vice versa.

The researchers found that, over time, cool-pool corals transplanted to the hot pool became more heat-tolerant. Although these corals were only about half as heat-tolerant as corals that had been living in the hot pool all along, they quickly achieved the same heat tolerance that could be expected from evolution over many generations. Corals, like people, have adaptive genes that can be turned on or off when external conditions change. The corals Palumbi’s group studied adjusted themselves by switching on or off certain genes, depending on the local temperature.

These findings make clear that some corals can stave off the effects of ocean warming through a double-decker combination of adaptation based on genetic makeup and physiological adjustment to local conditions.

“These results tell us that both nature and nurture play a role in deciding how heat-tolerant a coral colony is,” Palumbi said. “Nurture, the effect of environment, can change heat tolerance much more quickly – within the lifetime of one coral rather than over many generations.”

Palumbi cautioned that corals’ heat-adaptive characteristics do not provide a magic bullet to combat climate change. They can’t respond to indefinite temperature increases and they could be compromised by stressors such as acidification and pollution.

Still, if it holds true for most corals, this adaptive ability could provide a “cushion” for survival and might give coral reefs a few extra decades of fighting back the harsh effects of climate change, Palumbi said.

Web articles – via partners/network co-ordinators. This website and its contents are the exclusive property of ANGA Media Corporation . We appreciate your feedback and respond to every request. Please fill in the form or send us email to: [email protected]
Previous: Elon Musk’s SpaceX to Sue World’s Biggest Military Over Launch Monopoly
Next: Bearded dragons linked to salmonella outbreak, CDC