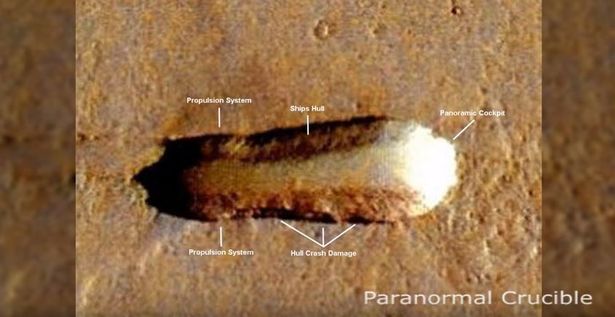 A new video has emerged on the internet that claims to have found evidence of a crashed alien mothership on Mars’ surface.

The images from the video were found in footage taken from NASA’s Mars Global Surveyor – which surveyed the red planet until 2006 when the space agency lost contact with it.

“I have processed, colorized and rebuilt the object and in my opinion it is a craft of some kind, possibly tens of thousands of years old,” explains the description underneath the video .

Some commentators have poured cold water on the theory, insisting it is only a piece of raised ground or a rock formation.

But the UFO hunters behind the channel are convinced of its authenticity.

“The object is too degraded to enhance totally so I have rebuilt it using the points of interest that are shown in the video,” the video states.

“It’s also over a mile long, so this must have been a mothership, either a Martian one or possibly an off planet alien species, but why did it crash?”

The outlandish video has been viewed more than 8,000 times.

It’s not the first time conspiracy theorists have claimed an alien civilisation is living on the red planet.

Strange domes and rock outlines resembling human-like items are often picked up on as evidence of pareidolia: when the brain is tricked into seeing familiar sights in strange objects.

Web articles – via partners/network co-ordinators. This website and its contents are the exclusive property of ANGA Media Corporation . We appreciate your feedback and respond to every request. Please fill in the form or send us email to: [email protected]
Previous: Hockey research suggests injured kids sent back on ice too soon
Next: 10-year-old takes police on wild car chase up to 100 mph (Video)