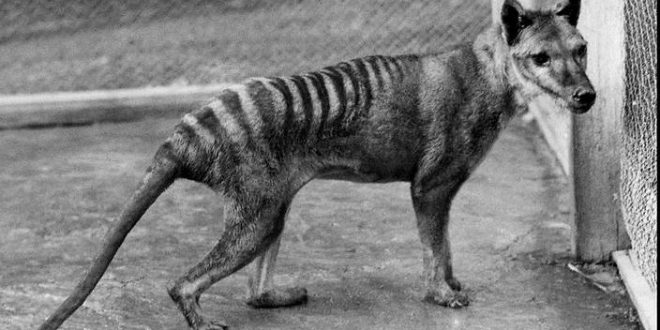 The mystery loss of Tasmanian tigers from mainland Australia was likely caused by climate change and not wild dogs or hunting by Aborigines, researchers said on Thursday.

The research, published in the Journal of Biogeography, could have implications for the fight to save the endangered Tasmanian devil (Sarcophilus harrisii), says geneticist and research team leader Jeremy Austin of the University of Adelaide.

“Devils have relatively low genetic diversity that potentially has placed them at greater risk of extinction due to genetic effects,” he says.

”On top of that, devil facial tumour disease has had a major impact on population size across most of Tasmania.”

His message to conservation biologists is “don’t give up”.

The Tasmanian tiger, also known as the thylacine (Thylacinus cynocephalus), was once widespread across Australia. Austin’s team wanted to find out why the iconic marsupial carnivore went extinct on the mainland just over 3000 years ago but survived on the island from which its name derives until relatively recently.

Tasmania was separated from continental Australia by rising sea levels about 12,000 years ago. Bounty hunters wiped out the thylacines there in fewer than 150 years, with the last of the species, about the size and build of a kelpie dog, dying in Hobart Zoo in 1936.

Austin’s researchers extracted DNA from thylacine bones and museum specimens for sequencing, and generated the biggest dataset of mitochondrial DNA ever made for the species.

Then they pieced together the family tree of the animal, using complex analysis to track population sizes through time.

Radiocarbon dates obtained by the Australian National University, in Canberra, and the University of Waikato, New Zealand, enabled the team to disentangle suspected factors, such as Aboriginal impacts, climate, and competition from the dingo.

They found that a big and genetically diverse population of thylacines in Australia’s west flourished. Times were tougher for those in the east of the continent, however.

The researchers concluded that climate variability caused by the El Nino–Southern Oscillation pattern was the main culprit in the species’ demise.

“The ancient DNA tells us that the mainland extinction was rapid, and not the result of intrinsic factors such as inbreeding,” says University of Adelaide PhD student and the paper’s lead author, Lauren White.

Web articles – via partners/network co-ordinators. This website and its contents are the exclusive property of ANGA Media Corporation . We appreciate your feedback and respond to every request. Please fill in the form or send us email to: [email protected]
Previous: Gravitational waves detected for fourth time by astronomers
Next: Is this how Earth formed? Our planet may have created by the evaporation molten rocks