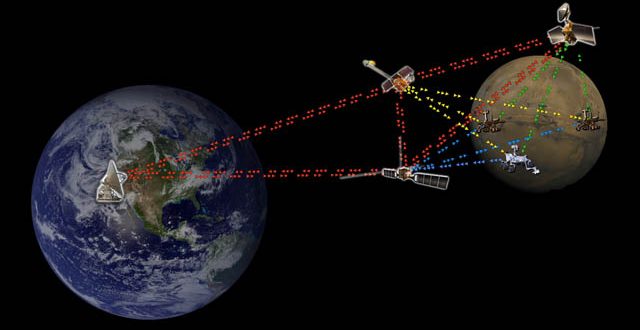 NASA has placed the base of the solar system internet by establishing operational Delay/Disruption Tolerant Networking (DTN), which is currently being tested on the International Space Station (ISS).

The system has been designed by a team of NASA scientists who worked closely with Dr. Vinton G. Cerf, vice president and chief internet evangelist for Google, known as one of the “fathers of the internet.”

On Earth, we’re accustomed to what happens when something blocks a wireless internet signal. The connection slows, or even becomes disrupted entirely. For transmissions from ISS, this was a big problem because the objects in the way were large and numerous – planets, other spacecraft, radiation waves, and the like. Those obstacles made the signal slow, and sometimes meant some data was lost in transmission. DTN addresses those pitfalls in the way it transmits data. Rather than streaming bit by bit, the DTN process stores data when and if a connection becomes interrupted, and then forwards it using relay stations to its intended destination. This means the network can function even when a recipient server is offline.

NASA has been testing DTN technology for years, and installed it earlier this month in the Telescience Resource Kit (TReK), a software suite for researchers to transmit and receive data between operations centers and their payloads aboard station. NASA reports that adding this service on the station will also enhance mission support applications, including operational file transfers.

In order to make this giant leap for the future of space internet, NASA partnered with one of the “fathers of the internet,” Dr. Vinton G. Cerf, vice president and chief internet evangelist for Google and a distinguished visiting scientist at NASA’s Jet Propulsion Laboratory in Pasadena, California. Cerf worked with NASA’s team to develop the technology, and he predicts many benefits in space as well as on Earth, especially in disaster relief conditions. “Our experience with DTN on the space station leads to additional terrestrial applications especially for mobile communications in which connections may be erratic and discontinuous,” said Cerf. “In some cases, battery power will be an issue and devices may have to postpone communication until battery charge is adequate. These notions are relevant to the emerging ‘Internet of Things’. ”

Web articles – via partners/network co-ordinators. This website and its contents are the exclusive property of ANGA Media Corporation . We appreciate your feedback and respond to every request. Please fill in the form or send us email to: [email protected]
Previous: Even launches earphones that adjust to your hearing (Video)
Next: 2016 BMW 3 Series welcomes the 340i (Review)