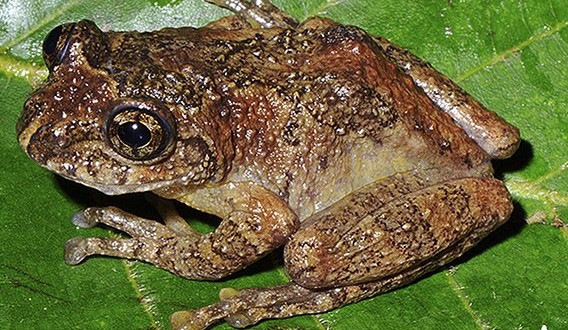 A tree frog presumed extinct for more than a century has been discovered again in an Indian jungle.

A group of researchers, led by renowned Indian biologist Sathyabhama Das Biju, has rediscovered the frogs and also identified them as part of a new genus — one step higher than a species on the taxonomic ranking. Not only have they found the frogs in abundance in northeast Indian jungles, they believe they could also be living across a wide swathe of Asia from China to Thailand.

“This is an exciting find, but it doesn’t mean the frogs are safe,” Biju said, adding that he hopes the discovery leads to more awareness of the dangers of unfettered development to the animals. The frogs were found at high altitudes in four northeast Indian states, underlining the rain-soaked region’s role as a biodiversity hotspot.

Some of the forest areas where Biju’s team collected frogs in 2007 and 2008 were already slashed and burned by 2014 for agricultural development. The region’s tropical forests are quickly disappearing because of programs to cut trees, plant rice, expand human settlements and build roads.

Industrial growth amid a decade-long economic boom has also increased pollution, to which frogs are particularly vulnerable. That same sensitivity to climate and water quality makes them perfect environmental barometers, putting them at risk when ecological systems go awry. Of the more than 7,000 amphibian species known globally, about 32 percent are threatened with extinction, according to the International Union for Conservation of Nature.

“This frog is facing extreme stress in these areas, and could be pushed to extinction simply from habitat loss,” Biju said. “We’re lucky in a way to have found it before that happens, but we’re all worried.”

Finding the frogs was an accident. The team had been searching the forest floor for other amphibians in 2007 when, one night, “we heard a full musical orchestra coming from the treetops. It was magical. Of course we had to investigate,” Biju said.

For the study of the new frog genus, Frankixalus, published Wednesday by the Public Library of Science journal PLOS ONE, Biju and his doctoral students teamed up with researchers from the central Indian state of Pune, Sri Lanka, Brussels and the American Museum of Natural History.

They looked at the frogs’ behavior, collected specimens and described their outer appearance and skeletal features. But it wasn’t until they had sequenced the frogs’ genetic code that they confirmed it as a new genus, and surprisingly found another DNA match from a single tadpole specimen reported recently under a mistaken identity in China.

The frogs had long been considered lost to science, with the first — and only — previously known specimens collected in 1870 by British naturalist T.C. Jerdon in the forests of Darjeeling. Over decades, the frogs were reclassified at least four times in cases of incorrect identity as scientists drew conclusions from their enlarged snouts or the webbing between their toes.

Biju believes the frogs remained hidden from science so long because of their secretive lifestyle living in tree holes at heights up to 6 meters (20 feet) above ground. Most tree frogs live in shrubs or tree holes closer to the ground. But other experts suggest that, while the uniquely high habitat does make them hard to find, the frogs probably remained in obscurity simply because there are so few scientists working in the remote region.

“This part of Southeast Asia, in particular, is poorly inventoried,” said James Hanken, a biology professor and director of the Museum of Comparative Zoology at Harvard University. Given the habitat threats and alarming rate of extinctions worldwide, he said the “remarkable” tree frog find “points out that we may be losing even more species than we know or can fully document.”

“It doesn’t in any way offset the tragic losses represented by global amphibian extinction,” said Hanken, who was not involved in the tree frog study.

Biju’s team named the new frog genus Frankixalus after herpetologist Franky Bossuyt, who was Biju’s adviser when he was a student at the Vrije Universiteit in Brussels. Only two species within the genus have been identified, including the Frankixalus jeronii first described in the 19th century. The scientists are still trying to confirm whether a second collected species was mistakenly named within another genus of tree frogs. There are now 18 tree frog genera known worldwide.

The study documents the tree frogs’ unusual maternal behavior, with the females laying fertilized eggs in a tree hole filled with water, and then returning at regular intervals after the tadpoles hatch to feed them with unfertilized eggs.

“This is incredible,” Biju said, excitedly dumping a pile of pickled tadpoles onto a glass-covered table in his office at the University of Delhi, and selecting one to place under a microscope. The magnification reveals a clutch of undigested eggs still inside the tadpole’s belly. “Do you see these eggs? Just imagine, the mother is coming back over and over and dropping these eggs for her babies to eat.”

Rather than nascent teeth, the tadpoles have smooth, suction-like mouths to pull in the eggs. Their eyes are positioned on the top of their heads, rather than on the sides. Biju suggested the feature may help the tadpoles see eggs being dropped by mother frogs into the hole during feeding time.

Fully grown, the frogs are about as big as a golf ball. Uniquely, they feed mostly on vegetation, rather than insects and larvae.

“Frogs have been around for 350 million years, and have evolved to face so many habitat challenges,” said Biju, who is known in India by the nickname “The Frog Man” and has discovered 89 of the 350 or so frog species known to be in the country.

Scientists said the work was crucial for both understanding the planet’s biological diversity and raising awareness about the need for conservation. Already, Australia has seen the extinction of one frog species that brooded tadpoles in its stomach, while Central America recently lost its brightly colored golden toad.

“Species discoveries and rediscoveries … can bring excitement and focus to animals like amphibians that, despite being the most threatened vertebrate group, are underrepresented in the media and scientific literature,” said herpetologist Robin Moore, co-founder of the Washington, D.C.-based Amphibian Survival Alliance. “Wonder and inspiration tend to be more powerful motivators than despair.”

Web articles – via partners/network co-ordinators. This website and its contents are the exclusive property of ANGA Media Corporation . We appreciate your feedback and respond to every request. Please fill in the form or send us email to: [email protected]
Previous: Electronic Cigarettes, As Used, Aren’t Helping Smokers Quit, study shows
Next: Volvo To Sell Deathproof Cars By 2020, Report