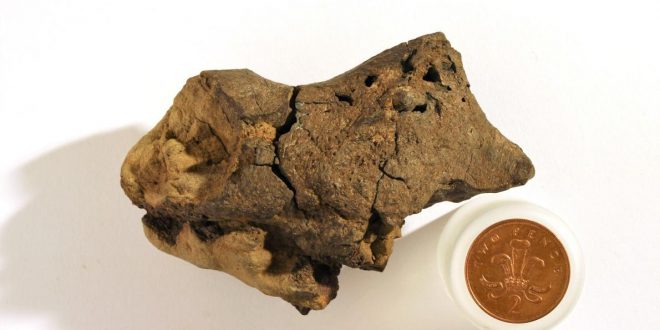 Scientists Claim to Have Found a Part of Fossilized Dinosaur Brain

Researchers from the University of Cambridge are averring that they’ve unearthed the world’s first known fossilised dinosaur brain. Dating back to roughly 133-million-years ago, the scientists have confirmed that the fossilised brain belonged to a herbivorous dinosaur that fell into a swampy tidal pool in southern England..

The brainy finding looked like an unassuming brown pebble when a fossil hunter in Sussex, England, found it more than a decade ago. Discovering any soft tissue from a dinosaur is rare since that material degrades faster than other types of tissue, and dinosaurs lived more than 66 million years ago.

Results of the research originally carried out by the late Professor Martin Brasier of the University of Oxford and Dr David Norman from the University of Cambridge have recently been published in a Special Publication of the Geological Society of London by an international investigative team. They suggest that the tissue most likely belongs to a relative of Iguanodon: a large herbivorous dinosaur that lived around 133 million years ago, during the Early Cretaceous Period.

“The chances of preserving brain tissue are incredibly small, so the discovery of this specimen is astonishing,” commented co-author Dr Alex Liu of Cambridge’s Department of Earth Sciences. According to the research team, in this case, the dinosaur’s brain was ‘pickled’ under highly acidic, oxygen-poor conditions as it potentially fell into a bog or swamp following its death. This allowed some of the soft tissue to become mineralised, thus preserving it, before the rest of the body was buried under sediment.

While brain soft tissue has never before been discovered for any terrestrial vertebrate, casts of the inside of brain cases have provided clues in the past. However, analysis of this fossil using scanning electron microscope (SEM) imaging techniques is shedding new light onto the similarities and differences between dinosaur brains and those of modern reptiles.

“Previously, anything we have known about dinosaur brains has had to be inferred from either comparison with what we think are modern relatives – so reptiles and birds – or just guessed from the shape of the structure on the impression of the brain on the brain case itself,” said Liu. However, the mineralised presence of meninges – tough tissues that surrounds the brain – as well as tiny capillaries and portions of adjacent cortical tissues now provide more reliable evidence that dinosaur and modern reptile brains have distinct similarities.

Despite the many similarities suggested by this specimen, researchers have proposed a fundamental difference. In typical reptiles, the brain takes up only half the space within the cranial cavity, being surrounded by a dense region of blood vessels and vascular chambers. However, this fossilised brain seems to have been pressed up against the skull, which has prompted the question, “Did some dinosaurs have larger brains that previously thought?”

While an exciting thought, the researchers warn against jumping to such conclusions. It is far more likely that the dinosaur’s head became overturned during burial, and as the brain decayed, gravity caused it to sink down onto the roof of the cranium. “Of course, it’s entirely possible that dinosaurs had bigger brains than we give them credit for, but we can’t tell from this specimen alone,” said Norman. Nevertheless, he considers it remarkable that the conditions were just right for the preservation of the elusive soft brain tissue, and he, along with many others, hopes that it will only be the first of many such discoveries.

Web articles – via partners/network co-ordinators. This website and its contents are the exclusive property of ANGA Media Corporation . We appreciate your feedback and respond to every request. Please fill in the form or send us email to: [email protected]
Previous: Sea Levels Will Rise Faster Than Ever, Finds new research
Next: How will Trump affect Canada?