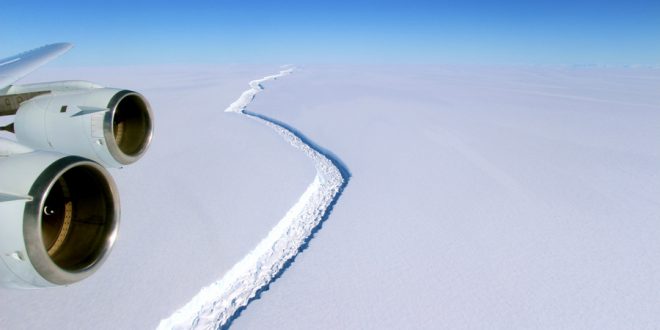 An iceberg the size of Delaware that broke away from an ice shelf in the Antarctic Peninsula in July is beginning to reveal an undersea ecosystem.

The massive calving also uncovered a mysterious and precious marine ecosystem hidden under the ice that could have been buried for up to 120,000 years – and it’s vital we protect this isolated sanctuary now it’s been laid bare.

Scientists from across the globe are now scrambling to reach the iceberg, which is named A-68, before it starts changing. The emerging ecosystem is classified as a Special Area for Scientific Study, under an international agreement that was adopted last year by the Commission for the Conservation of Antarctic Marine Living Resources (CCAMLR).

“I cannot imagine a more dramatic shift in environmental conditions in any ecosystem on Earth,” marine ecologist Julian Gutt from the Alfred Wegener Institute for Polar and Marine Research in Germany, told Nature.

The ecosystem, which according to scientists with the British Antarctic Survey (BAS), was shrouded in ice and not exposed to light for around 120,000 years, could help scientists uncover what causes such calving events, which are expected to become more common in the future.

“There’s this vast area which has been covered for thousands of years,” Susan Grant, a marine biologist with the BAS told Live Science. “We know the physical changes are likely to be huge when the ice moves away, and the ecosystem is likely to change along with that.”

“It’s just a fantastic, unknown area for scientific research,” Grant added. “We know very little about what might or might not be living in these types of areas, and especially how they might change over time.”

According to Phil Trathan, head of conservation ecology for the BAS, the newly exposed seafloor of the iceberg will likely experience rapid changes.

“You’ll have sunlight, you’ll have phytoplankton, and you’ll begin to get zooplankton and fish in there pretty quickly. You’ll probably also get seabirds and marine mammals are going to begin to forage in that area,” Trathan said. “So, it will be sort of a chain reaction — as you get productivity happening then you’ll get more species coming in, and so there will be quite significant changes over relatively short time scales.”

However, scientists now face the challenge of obtaining funding and resources required for expeditions to study the iceberg and the area before the hidden ecosystem undergoes any significant changes as a result of exposure to ocean currents and sunlight. Apart from the BAS, South Korean researchers are also reportedly mulling over possibly diverting a current mission planned for the South Shetland Islands to study the newly exposed ecosystem, according to Hyoung Chul Shin, a biological oceanographer at the Korea Polar Research Institute in Incheon.

“It’s very difficult to mobilize research efforts — it takes a lot of money, and ship time is not an easy thing to arrange, especially at short notice,” Grant said. “But the fact that a lot of groups are trying really hard to get something down there demonstrates that this is a really unique opportunity.”

Web articles – via partners/network co-ordinators. This website and its contents are the exclusive property of ANGA Media Corporation . We appreciate your feedback and respond to every request. Please fill in the form or send us email to: [email protected]
Previous: Prehistoric humans ‘avoided inbreeding’, scientists say
Next: Fireball meteor observed in SW China (Video)