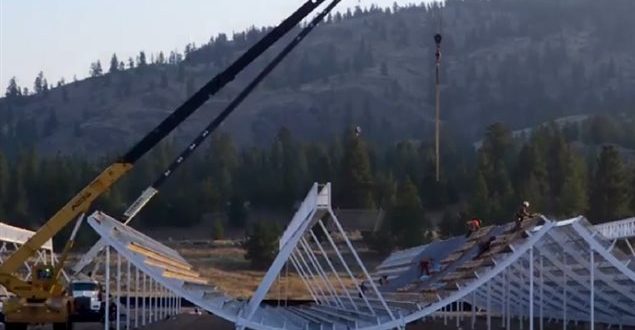 Giant Canadian Telescope to unlock the secrets of the universe

Giant Canadian Telescope to unlock the secrets of the universe

A brand new radio telescope in Canada just started searching space for digitized signals that can help the instruments measure the expansion of the universe.

The Hydrogen Intensity Mapping Experiment is known as CHIME and the last piece was symbolically added today by Canada’s Science Minister Kirsty Duncan at the location near Penticton, British Columbia.

The unique telescope incorporates relatively low cost technology and massive computing power in a unique design considered one of the most unique in the world.

Quoted in a press release today, Dr. Mark Halpern, University of British Columbia says, “With the CHIME telescope we will measure the expansion history of the universe and we expect to further our understanding of the mysterious dark energy that drives that expansion ever faster. This is a fundamental part of physics that we don’t understand and it’s a deep mystery. This is about better understanding how the universe began and what lies ahead.”

The telescope will be measuring the composition of dark energy whereby scientists will better understand the shape, structure and fate of the universe. It will also be a key instrument to study gravitational waves, the ripples in space-time that were only recently discovered, confirming the final piece of Einstein’s theory of general relativity.

The array will also study the still little understood “Fast Radio Bursts”. The origin of these bizarre extragalactic events is presently a mystery, with only two dozen reported since their discovery a decade ago. Dr Victoria Kaspi of McGill University says “CHIME is likely to detect many of these objects every day, providing a massive treasure trove of data that will put Canada at the forefront of this research.”

Web articles – via partners/network co-ordinators. This website and its contents are the exclusive property of ANGA Media Corporation . We appreciate your feedback and respond to every request. Please fill in the form or send us email to: [email protected]
Previous: Toscha Sponsler breaks out of handcuffs and steals police car (Video)
Next: Secret life may thrive under warm Antarctic caves, finds new research