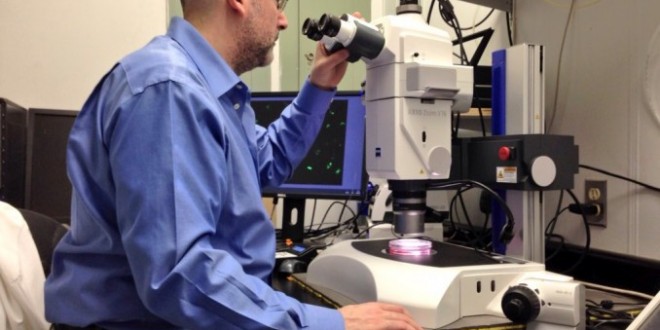 A Halifax researcher has made a breakthrough when it comes to gene editing that could lead to significant progress in cancer treatment.

To apply CRISPR in non-dividing cells — such as those in muscle and brain tissue — researchers must first make them behave like cells that divide. They do this by turning on a cellular process called homologous recombination, which protects DNA; the recombination allows a cell’s genes to be manipulated and rearranged without the possibility of causing more harm than good.

“You can’t accurately repair a gene in a non-dividing cell because basic pathways like homologous recombination aren’t turned on to enable the gene therapy to be carried out,” says Dr. Graham Dellaire, an associate professor and director of research in the Department of Pathology.

“My colleague, Dr. Daniel Durocher, and his team at Mount Sinai Hospital’s Lunenfeld-Tanenbaum Research Institute, found a way to re-activate the recombination that’s needed to do gene editing in a non-diving cell, but the group needed a way of proving it. That’s where we were able to help.”
Zeroing in on gene targets

In his laboratory at Dalhousie Medical School, Dr. Dellaire came up with a fluorescent tagging technique that allows scientists to identify when gene targeting has been successful in a cell — even in those that don’t divide.

“Our technique measures the efficiency of gene editing. We know that we’ve got a precision gene editing event when the cell we’re working with turns green and a beautiful ring appears around its nucleus,” explains Dr. Dellaire. “The green fluorescence then enables us to count tens of thousands of cell samples, so our statistics end up being very good.”

“It was thought to be impossible to do precision gene editing in a non-dividing cell. And that’s why Dr. Durocher’s breakthrough, and our publication in Nature, is so profound. Not only do we have the first evidence that gene editing in non-dividing cells is actually possible, but we’ve got a screening system that will enable us to keep improving gene therapies.”

Up to now, CRISPR has been used to treat diseases that affect parts of the body comprised of cells that divide, such as the blood.

This new knowledge will enable gene therapy to be applied to disorders of the musculoskeletal and nervous systems — systems that are made up of non-diving cells. It could also be used to fight certain types of infections.

“If you have a life-long, latent infection with a virus such as herpes, we could use CRISPR gene therapy to get rid of it,” says Dr. Dellaire. “Imagine if an ingredient in your cream could delete the genome of the herpes virus, and you never get a blister on your lip again.”
Mining for molecules

“In order to get non-dividing cells to behave like dividing ones, Dr. Durocher had to knock out important DNA repair genes,” explains Dr. Dellaire. “Since that can only be done in the lab and not in people, we’re now trying to identify molecules that will take the place of these man-made genetic manipulations. Our hope is that that we can find molecules that will one day make gene therapy a reality for diseases like muscular dystrophy.”

Looking for these molecules is an active area of research by biotech companies around the world.

“Our fluorescent tagging system is so unique and so efficient that we have a chance at finding molecules that these companies may not find. It’s kind of like a gold rush at this point, and it’s very important to dig in the right spot,” says Dr. Dellaire.

Partnering with the Vancouver-based Centre for Drug Research and Development (CDRD), Dr. Dellaire is working on identifying molecules that can be commercialized and developed into drugs. Currently funded by the Canadian Institutes of Health Research, he’s also looking for more research money.

“We could be world leaders in this area,” says. Dr. Dellaire. “The CDRD is ready to start screening. We just need the funding.”
Making gene therapy safer

More than 20 years ago, children born with a genetic disorder called severe combined immunodeficiency were the first people to be treated with gene therapy. It led to leukemia.

“These kids were being cured with a viral gene remedy. A virus was used to replace their faulty genes by inserting a new, healthy gene into their DNA. This just captivated the world; it was front-page news,” remembers Dr. Dellaire. “But by inserting the virus randomly into the genome and changing the children’s DNA, mutations formed.”

While CRISPR’s still not efficient enough to be better than using viruses for gene therapy, it’s getting there.

Using his fluorescent screening technique, Dr. Dellaire found that some molecules are capable of enhancing gene targeting by up to six-fold. However, they’re potentially too toxic for use in patients, so there’s a need to find new ones.

“Because there’s a danger in using viruses to insert genes into our DNA, we hope our screening system will help identify molecules that will enhance CRISPR’s effectiveness,” says Dr. Dellaire. “The ultimate goal would be to replace viral gene therapies altogether, making gene therapy more efficient, more effective, and safer for patients.”

Web articles – via partners/network co-ordinators. This website and its contents are the exclusive property of ANGA Media Corporation . We appreciate your feedback and respond to every request. Please fill in the form or send us email to: [email protected]
Previous: Fast Radio Bursts: Researchers hear ‘huge’ mysterious and repeating signal from deep in space
Next: Roger Ailes Says Fox Is ‘Finished with Rubio’ “Report”